Skip to content
This article is late to the party now that “silent disco” has been around for about a decade – but then again, when it comes to the potential of the events, it’s still a little early. 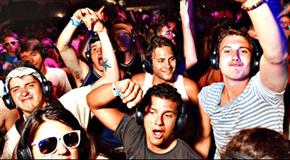 Silent Events is the first in a growing number of companies producing “silent disco” events.

Silent disco is the agreed-upon term for concerts where the music is delivered to wireless headphones. Most shows are DJ sets and they typically happen in places with strict sound curfews or where full sound production is problematic. But what began as a side attraction at Bonnaroo and a cute college event has grown into a viable live music opportunity. San Francisco-area producers Silent Frisco is putting on events like Hushfest and Treasure Island Music Festival, where bands play straight into the mixing board and broadcast to wireless headphones, with only vocals and the thump of the bass drum heard in the real world.

Silent Events is considered the founding father of this movement. Created by Ryan Dowd, a former tour manager for Widespread Panic and Drive-By Truckers, the company introduced wireless headphone disco parties at Bonnaroo. He admits that the concept was originally inspired by noise concerns, but it’s about two years away from a major happening.

“I think we just need another brand, apart from Coca-Cola and Nike, which we’ve worked with. A brand in the music industry,” Dowd told Pollstar. “‘I want to throw this show at Red Rocks but it’s completely silent.’ The missing part is that artist that’s ready to take it to the next level. Or maybe they want to have an after-show at an event, and this becomes that after-show.”

Silent Events has headphones with patent pending technology, and the company provides equipment to about 160 events a year. Three DJs could spin in the same room, and the listeners can dial in to one of three channels. The headphones have lights that shine a different color depending on what channel is chosen.

Silent Events recently hosted a college event with 1,800 attendees – and headsets. It could have brought more headphones but that was the most people the campus could accommodate in its gymnasium.

“For a while, the headphones and technology only allowed it to sound so good and work for a certain distance. For those limitations it became a niche event. A scene you checked out for 10 minutes,” Dowd said. “But now that the headphones are better, the range is more reliable and the longer range means more people, which means more headphones. It now will just take an artist to get behind it. If you’ve got a Skrillex or a Bassnectar who really wanted to do it, and doesn’t think it’s a weird side attraction, then I think it will work.”

Silent Events has also provided headphones for the backstage area so roadies and managers can hear the main attraction without going into the audience. “It provides the soundboard feed,” Dowd said. “It gives people I used to work with a way to hear music.”

The company and its equipment have have also been utilized by outdoor weddings and other events like birthdays, but Dowd is not interested in sending out any DIY kits. For one thing, there’s the potential of breakage. Then there’s the liability of having a DJ blow out the eardrums of the audience or the equipment needing to be adjusted on site.

Plus, the equipment needs to be sanitized after each use.

“There have been people who just saw this as an opportunity to make money,” he said. “They’ll order cheap headphones from Taiwan and there’s no production, no sound background. They just want to send you a box and hope the transmitter works. But there is an art to wireless transmissions.”

Silent Events has also provided broadcasting for events on boats touring around the Statue of Liberty.

“I see it utilized outside the silent disco spectrum. I’ve always wanted to do a live band on a double-decker bus or unique locations where you can’t bring in the power and the crew,” he said. “I’d like to see it utilized more as an alternative for all music, not just DJs.”