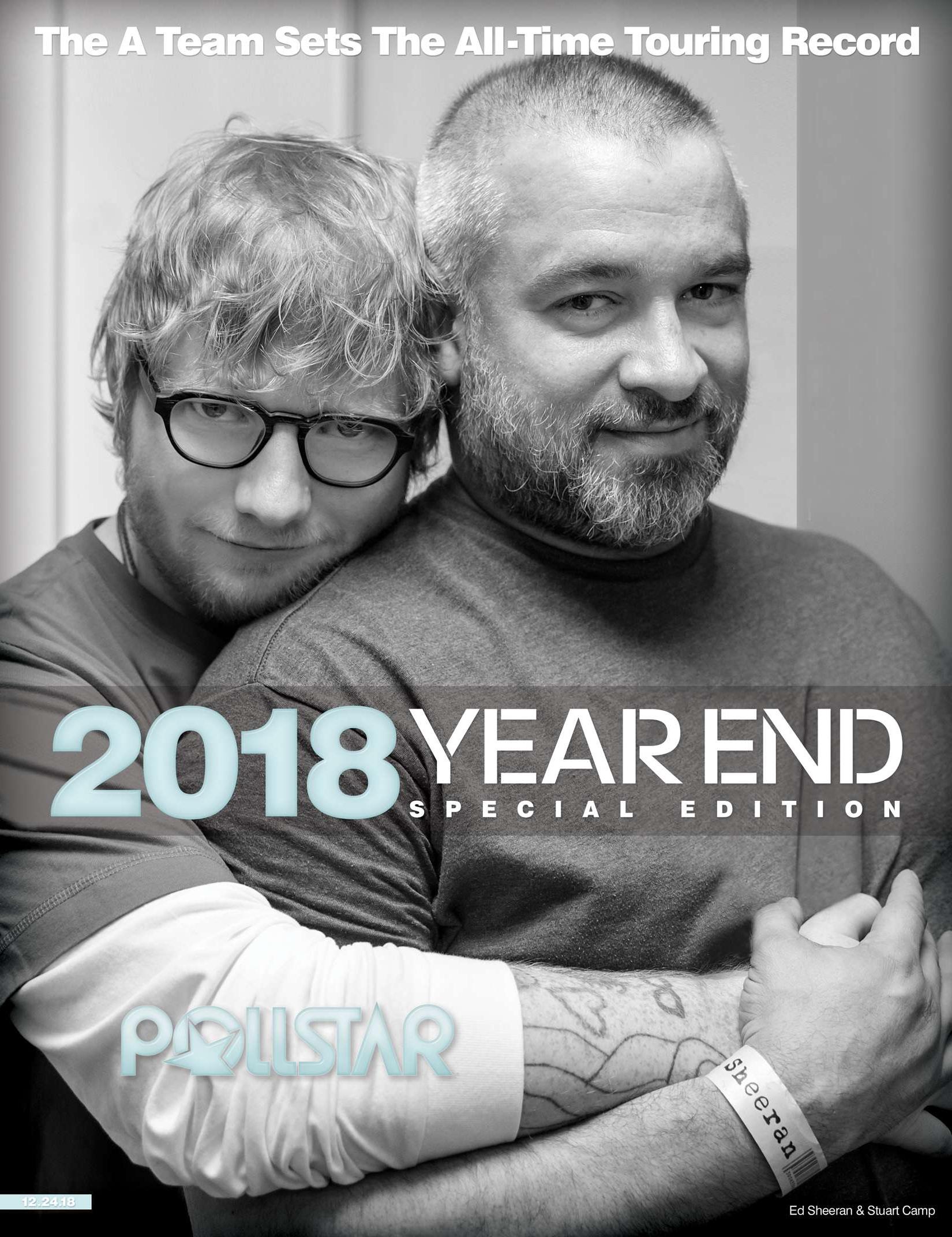 $432,398,856 is an audacious number. So is 4,860,482. A tour gross of the first amount in a single calendar year is unheard of, as is the latter figure for tickets sold. Yet, that’s exactly what Ed Sheeran’s “÷ Tour” did in 2018, marking it the highest gross and the most tickets tallied in any single year in Pollstar’s 30-year history.

“A very good manager friend of mine said ‘Can you fuck off please because you’re making me look really bad,’” says Stuart Camp, Sheeran’s colorful manager who’s back in London a week after the singer’s final 2018 tour date at Atlanta’s Mercedes-Benz Stadium.
“He was trying to sell an arena tour for his act that wasn’t going well. He was like, ‘Just piss off.’ In a good way, but you get what he was saying: ‘Will you just go away and give people a chance.’ “But we’re not doing it for ego, that literally was the demand. And we could have played a lot more, there just wasn’t a big enough window.” 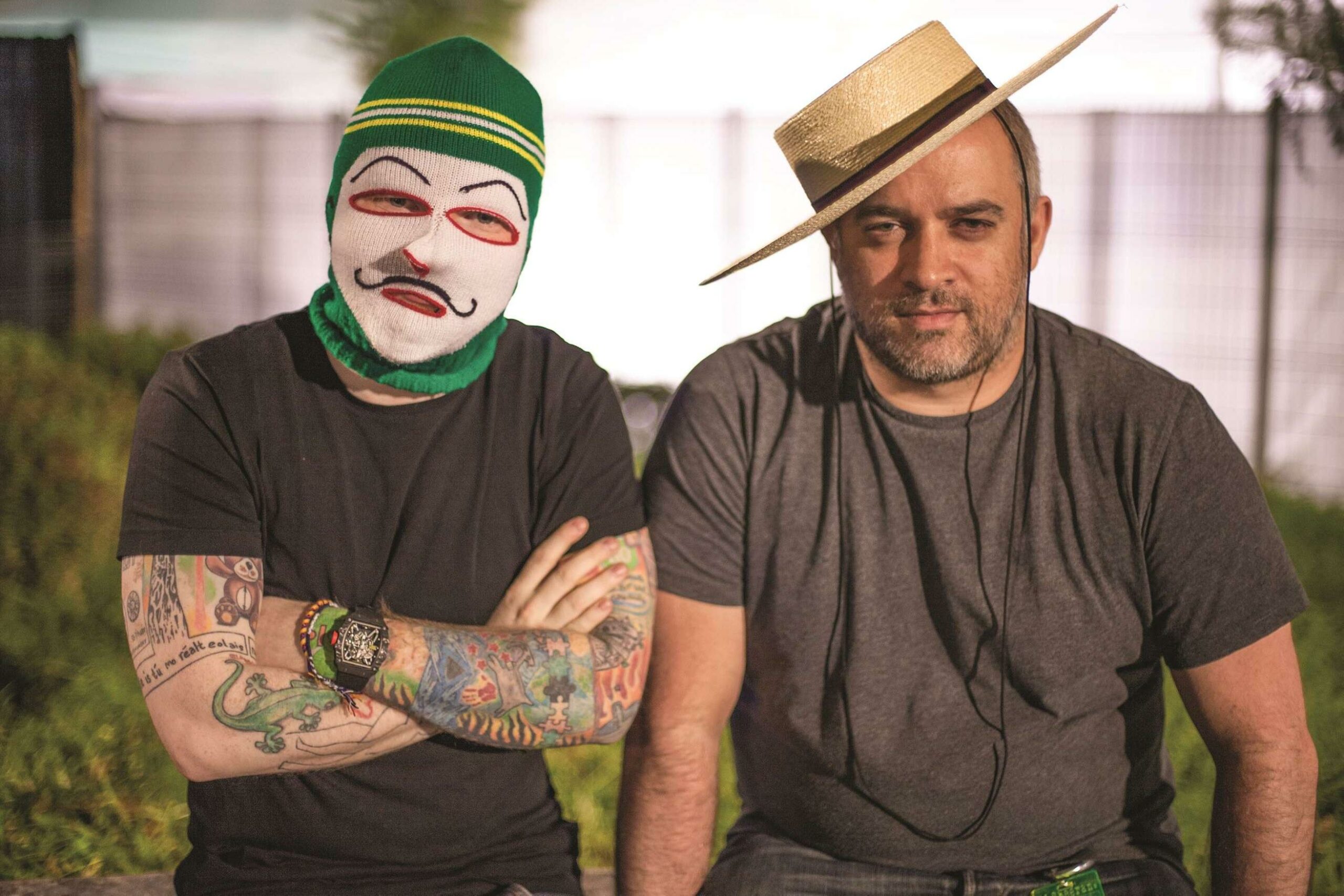 – Ed Sheeran
with manager Stuart Camp
To put all that in perspective, $432.3 million is less than U2’s historic “360” claw tour, which grossed $736.4 million and sold 7.36 million tickets, but that took over two years (June 2009-July 2011) to accomplish. And Sheeran’s $432.4 million gross is also 37 percent higher than the all-time worldwide chart topper, U2’s 2017 eXPERIENCE + iNNOCENCE tour, which brought in $316 million.
See: Pollstar 2018 Year End Special Features
It’s all the more wildly impressive considering Sheeran was performing solo, sans backup band, at stadiums with little more than an undersized Martin acoustic and effects pedals. There were no VIP sections and the average ticket price at $88.96 is $37.79 below 2018’s Top 10 average ticket price of $126.75, leaving an astounding $184 million(!) on the table.
Camp, whose only client is Sheeran, says various promoters and agents often tell him how much more he could be earning: “Our adage has always been to be as democratic and fair as possible,” We do meet and greets, but they’re for disadvantaged kids or contest winners; we don’t sell them and similarly with VIP ticketing. … Some kid who’s there and hasn’t got a job should have the same chances and the same access as anyone else.”
That’s an apostasy of sorts in this day and age where maximizing revenue strategies and squeezing every last penny out of a show in the name of selling into demand and cutting out the secondary market is de rigueur. That strategy, in some cases, has led to record grosses and profits but less than full houses – something Sheeran’s never had to contend with as his tour went from one side of the globe to the other.
In the Southern Hemisphere in March, Sheeran smashed records selling an astronomical 1 million tickets over the course of 18 stadium shows through Australia and New Zealand, promoted by Michael Gudinski’s Frontier Touring. It’s the biggest concert tour ever Down Under, breaking Dire Straits’ 32-year record for the “Brother In Arms” outing. 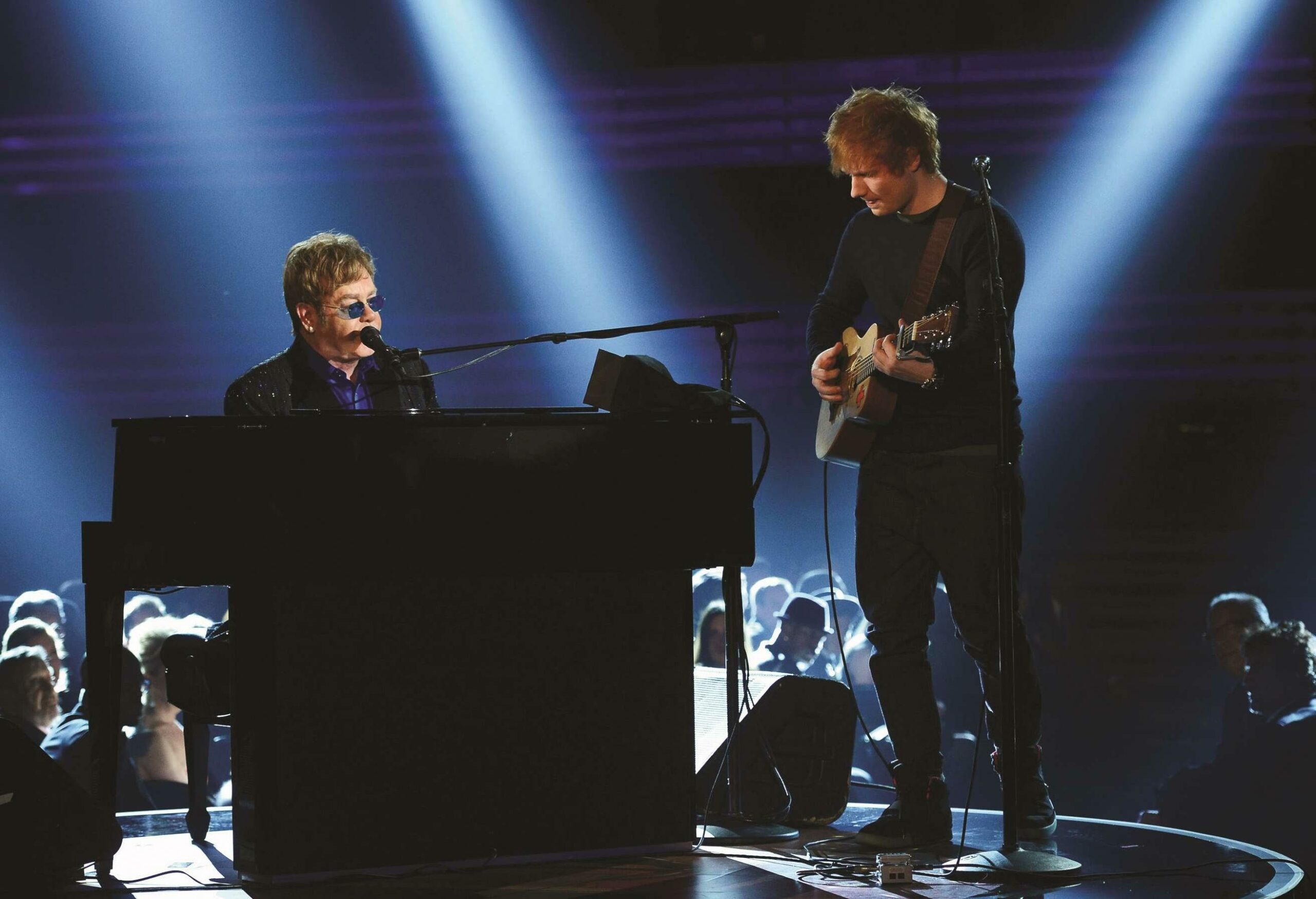 Kevork Djansezian / Getty Images – Ed Sheeran Elton John
Someone Saved My Life Tonight: Elton John, who was formerly in a joint venture with manager Stuart Camp, performing with Ed Sheeran at the 55th Annual Grammy Awards at Staples Center on Feb. 10, 2013, in Los Angeles
Sheeran hit European stadiums between May and mid-August in spectacular fashion, grossing $229 million on a 21-city tour. The run was topped by a $28.7 million four-night stand at London’s Wembley Stadium and a ticket count of 299,013. The Wembley stint, however, wasn’t Sheeran’s first.

“Jon initially looked at it when we played there in 2015 without even telling us,” Camp says, referring to CAA’s Jon Ollier, Sheeran’s longtime agent outside of North America whom he calls “dedicated to a fault.”
Then, Sheeran sold out three Wembley shows which didn’t go off quite as planned as the musician’s pedal board blew out three nights in a row. “Literally everything went dead,” Camp recalls. “Ed just walked to the side of the stage and had the microphone in his back pocket and did an a cappella version of ‘Parting Glass.’ He came off stage effing and blinding into his dressing room.”
Fortunately for Sheeran, he had one of the greatest musicians of all-time in his corner. “Elton [John] came in because he was a guest vocalist on a couple of songs,” Camp explains. “In my best managerial decision, I just sent him in there. And there’s nobody he can’t placate, bless him. He said, ‘Don’t be so fucking stupid. It was brilliant. Everyone was singing back, you had the biggest show of your life, you were brilliant.’ And then Ed was alright.”
Camp’s Grumpy Old Management, with its one client, until last February was part of a JV with John’s Rocket Music Ent., which Camp joined in 2007. Coming up on the label side from being a “tea boy” at Mushroom Records/Infectious Music with Korda Marshall, which got absorbed into Warners, Camp came to work with James “You’re Beautiful” Blunt and his Back to Bedlam smash album which sold over 11 million worldwide. That led to joining Twenty First Artists Management, Sir Elton’s first management concern before Rocket. There he helped oversee an artist named Just Jack (Jack Allsopp) – all of which led to Camp’s first Ed Sheeran encounter.
“Jack rang me up one day and said, ‘You’ve got to come see this lad I found online – he’s amazing,’” Camp says. “Ed was managed by someone else at the time, but I went up to Leeds to see Jack, and Ed just blew me away. He played to a half-empty room, he must have been 17 but with balls of steel, and his showmanship was out of this world. He could win you over with songs no one had ever heard before and at that age it was quite something else.”
Like all good management-artist relations, Sheeran and Camp sealed their deal in October 2009 in high-style. “There’s a pub in West London where Rocket’s office was and we went for a lunch meeting and ended up there until six o’clock,” Camp says. “We managed to pour ourselves out and he kind of moved in that day. It was just a, ‘Oh, I’ve nowhere to crash.” I said, ‘You can crash on my sofa’ and that was kind of it, really.”
Camp says his management style is derived from “knowing how to treat people and not being the old-school sort of Peter Grant style of management where you think shouting and being rude achieves anything.” In that vein, Camp unconditionally supported Sheeran in his pursuits. 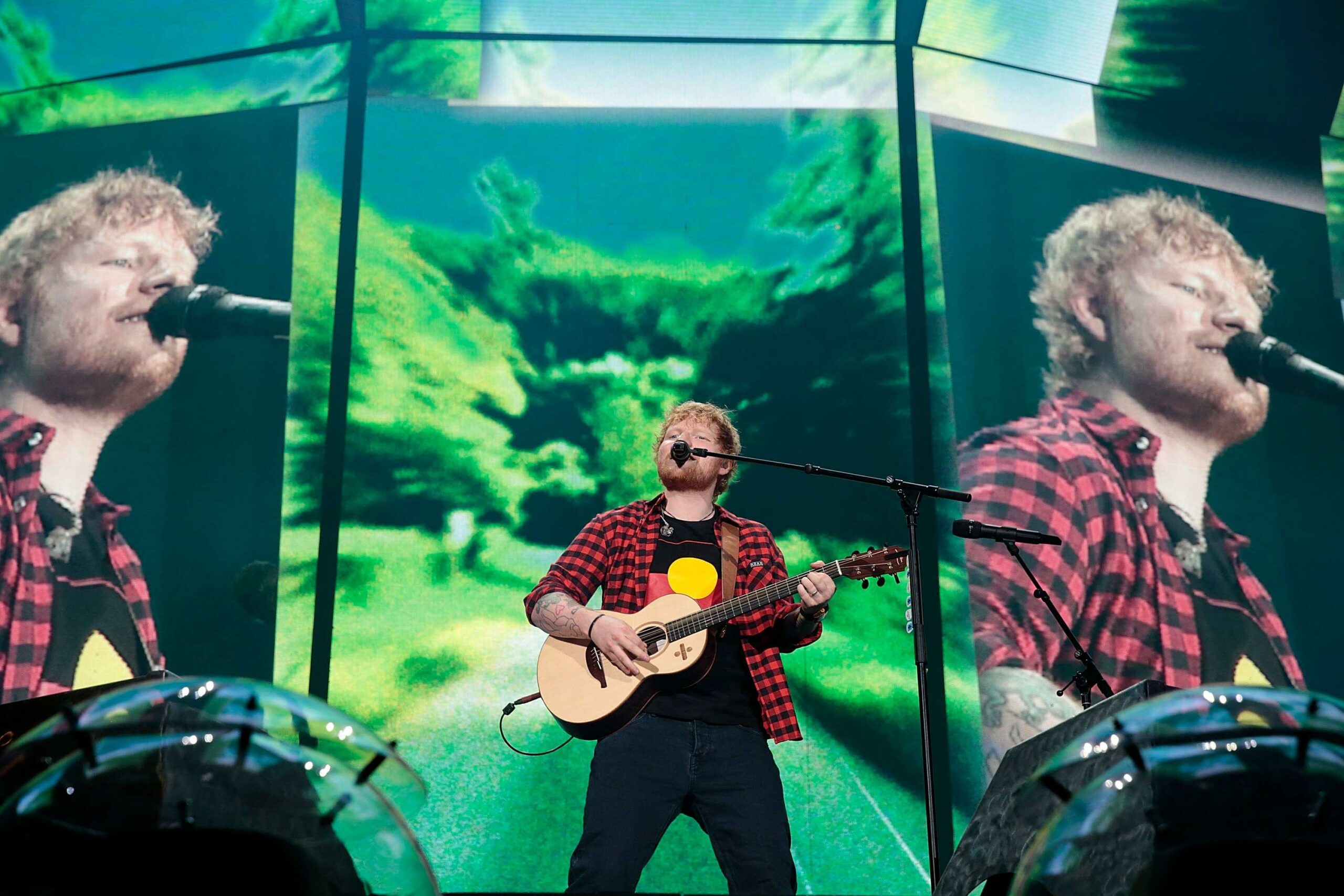 “He’d play open mic nights and go to poetry evenings and things that weren’t your standard rock crowd,” Camp recalls. “If anyone would have him, he’d go. I’d go see him thinking, ‘Let’s go and have a beer and go home.’ And he’d go, ‘Oh, no, no, no. I’ll see you later. I have to do another one.’ He’d play people’s parties. He’d advertise, ‘Give me 20 quid and a couple of beers, I’ll come and play your house party.’ That was always his strong point, just put yourself in front of people and the word of mouth will spread and that’s what happened. He was fearless and relentless and every show got better.”

Sheeran’s first proper tour came in spring 2011 after “The A Team” started getting traction at radio. “He progressed from tiny little venues to Shepherd’s Bush Empire to Brixton Academy, to the Hammersmith Apollo very, very quickly,” Camp says. “Every show was getting exponentially bigger.”
A tour opening for Snow Patrol in the U.S. followed (well, after a bizarre story of Sheeran going to L.A. and sleeping on Jamie Foxx’s couch) and then he landed the opening slot for another young artist.
“Ed met someone from Taylor Swift’s management at the Snow Patrol shows who asked if he was interested,” Camp says. “We literally got a phone call two weeks later out of the blue saying, ‘We’d love you to come out with us.’ It was fortuitous timing; we were coming towards the end of touring and had to make a record or take a break or gamble on six months in the U.S.A.”
Five years since Sheeran opened stadiums on Swift’s “Red Tour,” the 27-year-old has just completed his first North American stadium run. The $105 million grossed over 24 dates is the sixth most for a U.S. tour this year. This included a $11.2 million gross from two MetLife Stadium shows and another $9.8 million for two Gillette Stadium performances.  Otherwise, the multiples on the U.S. run were kept to a minimum for good reason.
“We were posed with challenges because we started in August and ended in November on this stadium run,” says Paradigm’s inimitable Marty Diamond, Sheeran’s North American agent who first saw Sheeran perform in the aughts at a pub in Guildford. “It was smack into football and baseball playoffs. We even had to deal with a soccer playoff.”
When asked to what he attributes Sheeran’s unprecedented success to, Diamond cites the 27-year-old’s commitment. “He has a work ethic like I’ve never seen,” Diamond says. “And he’s crossed the divide of great songs that are infectious and resonate. I cannot tell you how many emails I get about, ‘Can Ed play ‘Perfect’ at my wedding?” I get 10 of those a day.”
“Ed Sheeran had an unbelievable year,” adds Louis Messina, Sheeran’s North American promoter. “He has that drive. When he was opening for Taylor doing stadiums, he was nudging me, saying, ‘You and me, Louis, we’re going to do this, right?’ And I go, ‘We’re going to do it.’”
The U.S. duo are part of Sheeran’s larger global team that’s difficult not to call “The A Team,” though that’s who they are to Camp. “There’s no one I would swap out for anybody,” Camp says. “That goes from the promoters, the agents, down to every last member of our road crew. With my hand on my heart, everyone we work with is the best at what they do and that’s no bullshit.”
In addition to the aforementioned Ollier, Diamond, Messina and Gudinski, the team includes U.K. co-promoter Steve Tilly of Kilimanjaro Live, Dan Elam at DHP Family, Simon Jones at AEG, tour manager Mark Friend, Chris Marsh on production and sound, and Mark Cunniffe, the show’s designer.
After the current break, Sheeran’s “Divide Tour” picks back up in February with stadiums in South America (“Phil Rodriguez with Move Concerts is brilliant,” Camp says), South Africa, Asia and back to Europe again with a special last date at the end of August. “We’re finishing in Ipswich, which is Ed’s local town,” Camp says.
“By the time we finish next year, we’ll just be shy of 7 million [tickets],” the shrewd manager says, including last year’s arena tour that moved 1.525 million tickets and grossed $124 million, which was good enough for No. 8 on Pollstar’s 2017 Worldwide Tours charts. That total tally could very well put Sheeran in reach of and even surpass U2’s record-setting “360 Tour.”
All of which begs the question: how does one go about besting a record run like the “Divide Tour”?  “I don’t think you can, can you?” Camp says. “For Ed going forward, I think we’ll always try. I think there’ll be different ways to present the show next time around, but we will try and top it, you can be rest assured of that.”
SUBSCRIBE TO POLLSTAR HERE
# Andy Gensler# Ed Sheeran