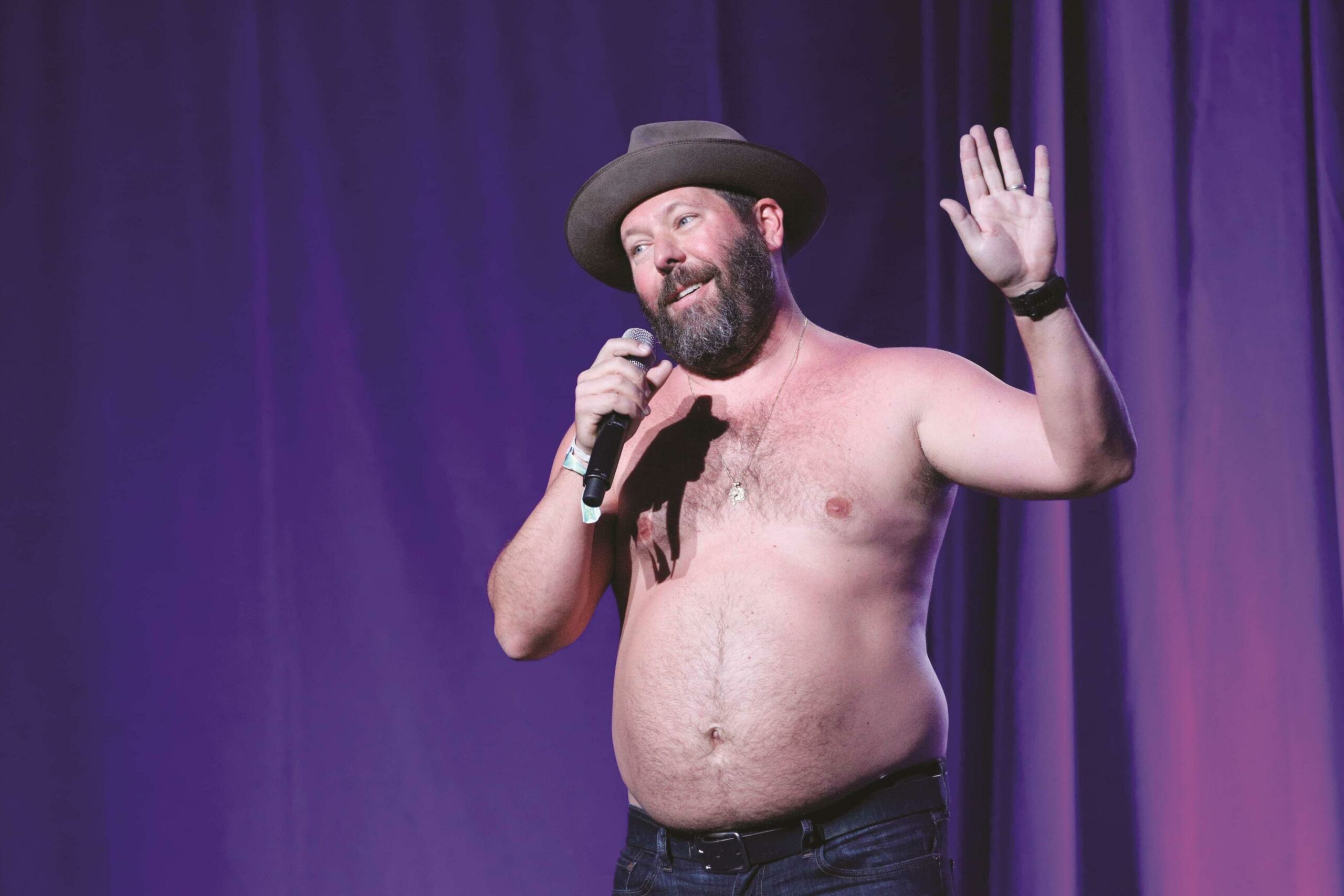 FilmMagic – Bert Kreischer
at Cluster Fest in San Francisco in 2018.

Bert Kreischer’s comedic style can be a little crude at times but he’s no dummy, going from being featured in a 1997 Rolling Stone article as “the top partier in the top party school” during his time at Florida State to now headlining sold-out theatres coast-to-coast as a touring comedian.

“I had a change in heart in how I ran my business and kind of took charge of promoting myself,” says Kreischer, 47, who became his own in-house marketing department and content creator when a few of his now-most famous bits went viral three or four years ago. “When you’re doing the comedy clubs you almost don’t care – you know what you’re getting paid so it doesn’t matter so much if the club does poorly. But I started caring.”
Depicted in Rolling Stone as a perpetually drunk undergrad contemplating skipping class to play Frisbee in the sun or maybe watch “Sports Center” on ESPN, Kreischer’s college antics were the inspiration for the 2002 film “National Lampoon’s Van Wilder.”
These days, Kreischer takes the stage shirtless with full dad-bod in view – he just feels more comfortable that way, OK? – telling somewhat unorthodox stories about his family (having that child who may or may not be in “the stupid class” at school), love life (including various bodily functions and fluids) and his most famous bit – the time he was embraced by the Russian mob during a college field trip where he became known as “The Machine” and helped rob a train.
A seasoned performer from standup on the comedy-club circuit as well as camera chops from hosting TV shows including “Bert The Conqueror” on the Travel Channel, Kreischer had the skills to craft compelling content and build his fanbase directly through social media and his podcast. He could tease his style of comedy (pounding beers with 100 shirtless guys in Glasgow, for instance) while letting fans know he was coming to town – something not every touring artist does effectively.
“I’m a big fan of Wilco. My buddy called me and said, ‘You should have gone to the Wilco show last night.’ What? Wilco was in town? I was home, I was off that weekend. I actually got frustrated with Jeff Tweedy,” Kreischer said of the lightbulb moment, laughing. “I’m a fan of his. I want to give him my money. I’ll drive! I looked and flipped that paradigm around to me: I bet there are people that like what I do and didn’t know Bert was going to be in town this weekend.” He started recording and editing his own videos with fun original content, with a throw to tour dates and ticket sales at the end, and saw instant spikes in ticket sales.
Laughing that Jeff Tweedy probably isn’t going to post a video of himself going down a giant waterslide with a beer or dancing to Post Malone to promote his next gig, Kreischer says today’s social media marketing landscape “lends itself to comics, because we’re funny and goofy and don’t take ourselves too seriously.”
Kreischer’s manager, Judi Marmel of Levity Live, says a perfect storm has led to Kreischer’s explosive touring trajectory over the last few years, which sees him this year headlining two nights at the Ryman Auditorium among his dozens of dates on his upcoming “Berty Boy Tour.”
“Fans love the intimacy that comes from knowing the artist via the podcast,” says Marmel, who as founding partner and president of talent at Levity Live also manages major comedians like Sebastian Maniscalco and up-and-coming 25-year-old Taylor Tomlinson. “To me why it worked is a combination of the podcast fans, the fans coming off of Netflix, social media, and the other thing is he does morning radio. You see a lot of artists good in one of those categories but I don’t know if you see a lot of artists good in all of those categories.” 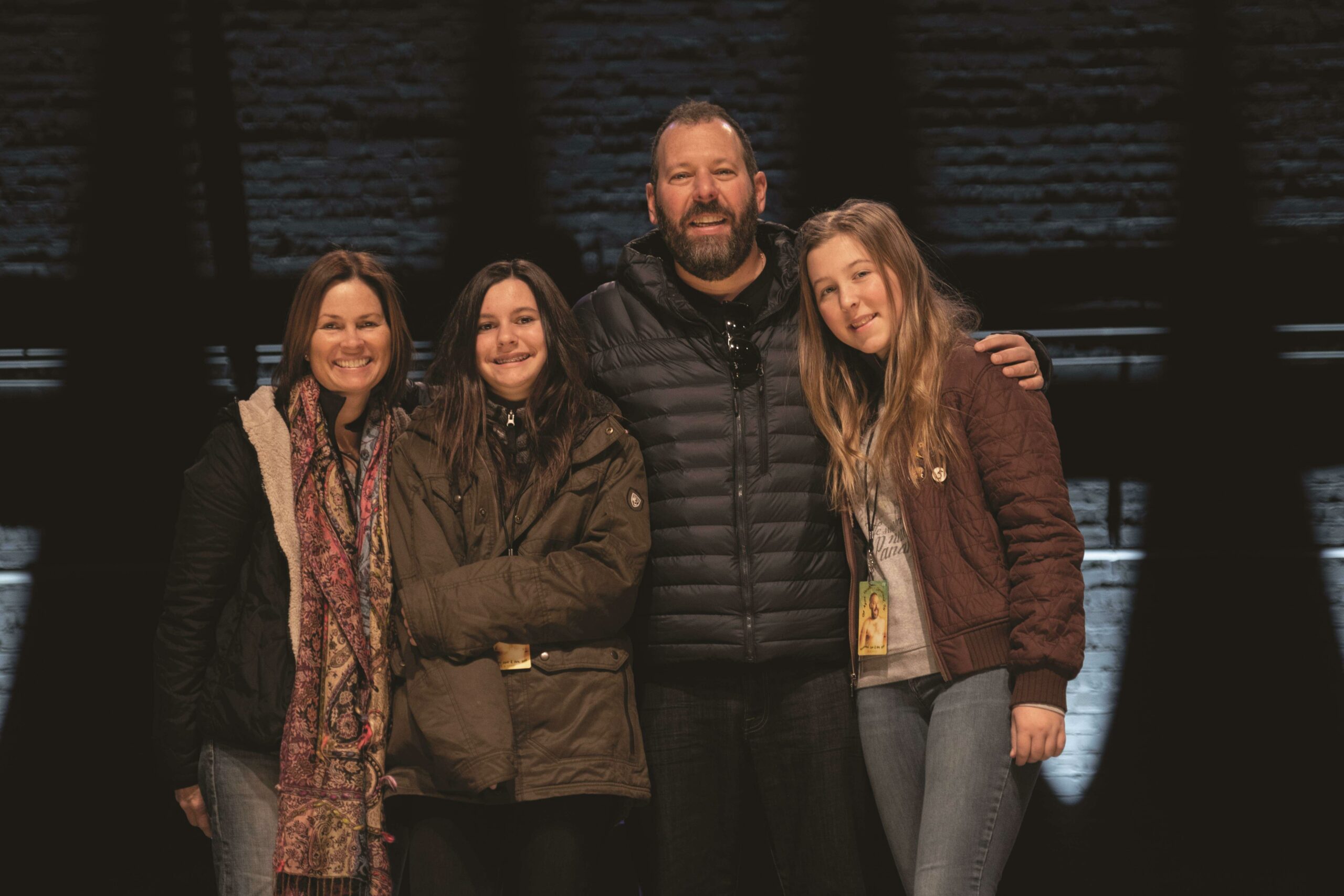 – Bert Kreischer
Family Affair: Bert with wife LeAnn and daughters Georgia and Ila, after one of his seven sold-out shows at the Agora Theatre in Cleveland.
“Bert is a master of self-promotion,” adds United Talent Agency’s Heidi Feigin, who has worked with Kreischer for more than 10 years. “He is not afraid to really put himself out there. That bravery has contributed to the viral success of his videos, including his recently posted ‘Dance Video’ which has accumulated almost 7 million views.
“As a client, he is a true force of nature with unparalleled work ethic and determination.”
While it took some time to fully reach his audience, Marmel always knew they would get there.
“We always knew he was an original. Everybody that saw him even in the comedy club days thought he was an original. He didn’t sound like anybody else and that is always the key to great comedy – how do you find an artist that is relatable but doesn’t sound derivative?”
The hard work has led to hard-ticket, coast-to-coast touring including seven sold-out shows at the Agora Theatre in Cleveland in November (7,069 tickets, $399,242 grossed), which was filmed for a Netflix special that debuts in February. Feigin says the “Body Shots” 2019 tour, Kreischer’s first major theatre run, grossed about $9 million, nearly selling out all 150 shows.
The big year saw him make Pollstar’s Top 200 North American tours at No. 172. That’s higher, as playfully already noticed by Kreischer, than fellow comedian and podcast collaborator Tom Segura at No. 197.
That ribbing between comics, including when fellow touring comic Jo Koy sends takedown videos poking fun, is indicative of a new type of comedy community and business, as Kreischer himself notes.
“Comedy’s changed so much in the sense that it was so competitive when I started. If that person succeeded, it defined my failure,” Kreischer says. “But, trust me when I say, if Tom is doing 5,000 seats in Denver his success can only benefit all of us. And I think that started with podcasting.
“Look at [Joe] Rogan, probably the most prolific name in comedy right now. Type any comic’s name into Google Trends and you’ll see a huge spike the day they went on Rogan.”
While many comedians do standup while working out movie or TV deals, Kreischer says his goal has always been – and continues to be –  to tour.
“Anything I do, anything across the board, specials, TV shows, podcasts, everything I do is to get people to see me perform live,” Kreischer says, while on his way across the country to a gig in Atlantic City. “If you tell me today that I could be in a movie with The Rock and it shoots for a month, and it’s a starring role and will help sell tickets, then great. But if you get me a role that may get cut out of the movie, then I’d rather just sell tickets.
“I don’t care about being a movie star, I care about being a great comic. What, am I Gene Hackman? Am I going to start my movie career at 47? I’ve seen myself act. I’m okay [laughing]. I’m not that great, but I’m a fantastic comedian who can get people out to my shows.”
With the grind of touring and recording specials, Kreischer says the best part is still writing fresh, new material, something he has no trouble with as he raises his two teenage daughters – although he admits they are trying not to share too much of their personal lives with him for fear that it might end up on stage. Still, “I have a new hour I’m touring with for this ‘Berty Boy Tour’ that kicks off in January,” Kreischer says.
“It’s funny shit. There’s no better feeling than having a new bit – not that it works perfectly, but the first time you get it to work is such a great feeling. I got a new bit about finding a child, and I’m obsessed with it.”
The “Berty Boy Tour” kicks off Jan. 30 in Vermont, with a slew of dates into June with many multiples added, including two nights at the Ryman Auditorium in Nashville, Cobb Energy Performing Arts Centre in Atlanta, Hard Rock Live in Orlando and others.

– Bert Kreischer
Berty boy: Kreischer’s 2019 “Body Shots” theatre tour grossed around $9 million on 150 shows, and he even hosted the Pollstar Awards in February.
“We have already sold out and added shows in multiple markets for the first leg of this tour, so 2020 is shaping up to be an even bigger year for Bert,” Feigin says.  Along with the Netflix special, there’s a film in development with Legendary Pictures based on “The Machine,” according to UTA. Going forward, Kreischer says he’s content to grow his business slowly and steadily, but sees arenas as a possibility.
“My whole goal in this business has always been to Just increase my business by 10% every year,” Kreischer says. “I don’t think anyone trusts the leap where you go from 1,000 seats or clubs straight to arenas, but I would love to do what Chappelle and Rogan did – 21,000 seats? Everyone wants to do the Garden, everyone wants to do the Forum, Staples Center, everyone wants that opportunity once at least. I would love that.”
That seems more than possible, with UTA’s Feigin adding, “It is just a matter of time before Bert becomes an arena-level act.” And, while any artist would like to have a marquee show in a marquee city, part of Kreischer’s impressive touring is that he can do weeknights in tertiary markets as well.
“Bert is equally as popular with mainstream America as he is in the big cities,” adds UTA’s head of comedy touring, Nick Nuciforo. “That is powerful! He has the ability to play 100-plus markets domestically, and tremendous growth potential worldwide.” Feigin adds that Kreischer has done 25 shows outside of North America in 10 different countries.
Adds Marmel, “People are seeking an authenticity and I think it’s what you see is what you get with him. In a world where everybody is pretending to be something they’re not, he’s showing you exactly who he is. Also I think he’s completely relatable. Look at why the fans appreciate it. He’s a dad and talks about the struggles of being good husband, struggles of weight, maybe drinking too much sometimes.”
“There’s something about that authenticity and that comes down to, ‘Why do I take my shirt off? Because I feel more comfortable.’ He’s somebody comfortable in their own skin telling other people, ‘I’m comfortable in my own skin and no reason you shouldn’t be having a good time too.’ “As we go into an election year, he’s the antidote for all of that. When you’re sick of hearing about all of that on TV, what’s wrong with being happily married and throwing back a few? Look at the fans and you really see that.”
# Bert Kreischer