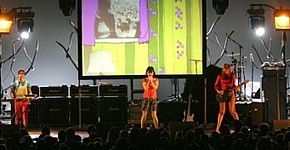 “It was time for a change for us,” Le Tigre frontwoman Kathleen Hanna told Pollstar.

During Le Tigre’s days at Mr. Lady, the group communicated its message of D.I.Y. ethics, gay and feminist rights issues, and government politics to a fairly large underground community over five years.

For the band’s third full-length release, This Island, members Hanna, Johanna Fateman and JD Samson decided to sign to Universal’s Strummer Recordings. With the switch, ex-Bikini Kill member Hanna said it was either sign to a major or split up.

“I was bored doing the same thing over and over and kind of exhausted from 15 years of touring with no help,” she said. “I’m 36 years old so I’m kind of like tired of driving the van myself and not getting enough sleep. … It was like, ‘We have to make a big change or we’re going to break up.'”

Prior to the signing, the bandmates felt they were spending too much time on the business side of their career and not enough on the creative. The trio was also itching to spread their message of anti-Bush politics and feminism to a larger mainstream audience. So they hired manager Tom Sarig of New York’s Esther Creative Group. Sarig saw the energetic trio perform as an A&R rep for MCA Records before the label went under almost two years ago.

“They were one of my favorite bands,” Sarig told Pollstar. “It’s an incredible live show because they are all such incredibly dynamic and captivating performers.

“I always look for bands that are not only about good songs but have some kind of socio-political worth and value and are saying something. … I think their message is really something that’s pure and valid.”

Sarig added that Le Tigre’s music is “completely unique to anything else that is out there,” and he feels the band’s live show is one of its strongest aspects.

Upon the October release of This Island (referencing the band’s Manhattan residence), Le Tigre embarked on a headlining tour of North America that found them selling out many venues including two nights at both New York’s Irving Plaza and the El Rey Theatre in Los Angeles.

“I get calls from promoters and they’re blown away,” agent Marsha Vlasic of MVO Ltd. told Pollstar. “I don’t know what they used to be like but this tour has been incredibly successful considering that it was very early on the release of the record.”

Vlasic recalled a Le Tigre gig in New York that left her captivated. 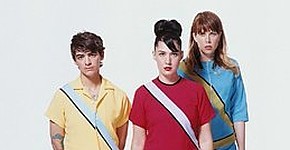 “I watched the entire thing; I couldn’t take my eyes off the stage. It’s fun, it’s deep, it’s everything,” she said.

The band also has a strong connection with its audience, Sarig said.

“They really care about their fans in a way that’s kind of unusual, and they care about the well-being of them and they’re sort of anti-violence,” he said. “They’re kind of the antithesis of a rap-rock band.”

Hanna hopes the band’s message will translate to new faces in the audience and the music will inspire other female musicians.

“For women, who typically have been, in a lot of ways, discouraged from being musicians, hopefully it’s exciting to see that not only are we being musicians, but we’re not being typical and that we’re not necessarily following the rules that somebody else made up for us,” she said.

Since the release of This Island, Le Tigre has managed to get its single “TKO” played on more than 20 commercial alternative rock stations in North America. The band also recently made its first proper video for the song and earned a spot on MTV2’s “Subterranean.”

The trio has also re-released its entire back catalogue on its own independent label, Le Tigre Records.

But even with the group’s current success, Sarig is skeptical that a female-based band can easily win over the mainstream.

“I love a lot of female artists but if you look at the rock charts, you won’t really see many females on there for whatever reason,” Sarig said. “Radio is so formatted in America that it’s very frustrating.”

But neither Sarig nor the band is intimidated. Le Tigre recently played a support slot on one of six sold-out Pixies shows at New York’s Hammerstein Ballroom and is currently touring the world.

At press time, the band was playing shows alongside the Beastie Boys in Japan, and scheduled to play Australia’s Big Day Out festival in late January. Le Tigre also has dates scheduled for the U.S., U.K., and Europe well into March.