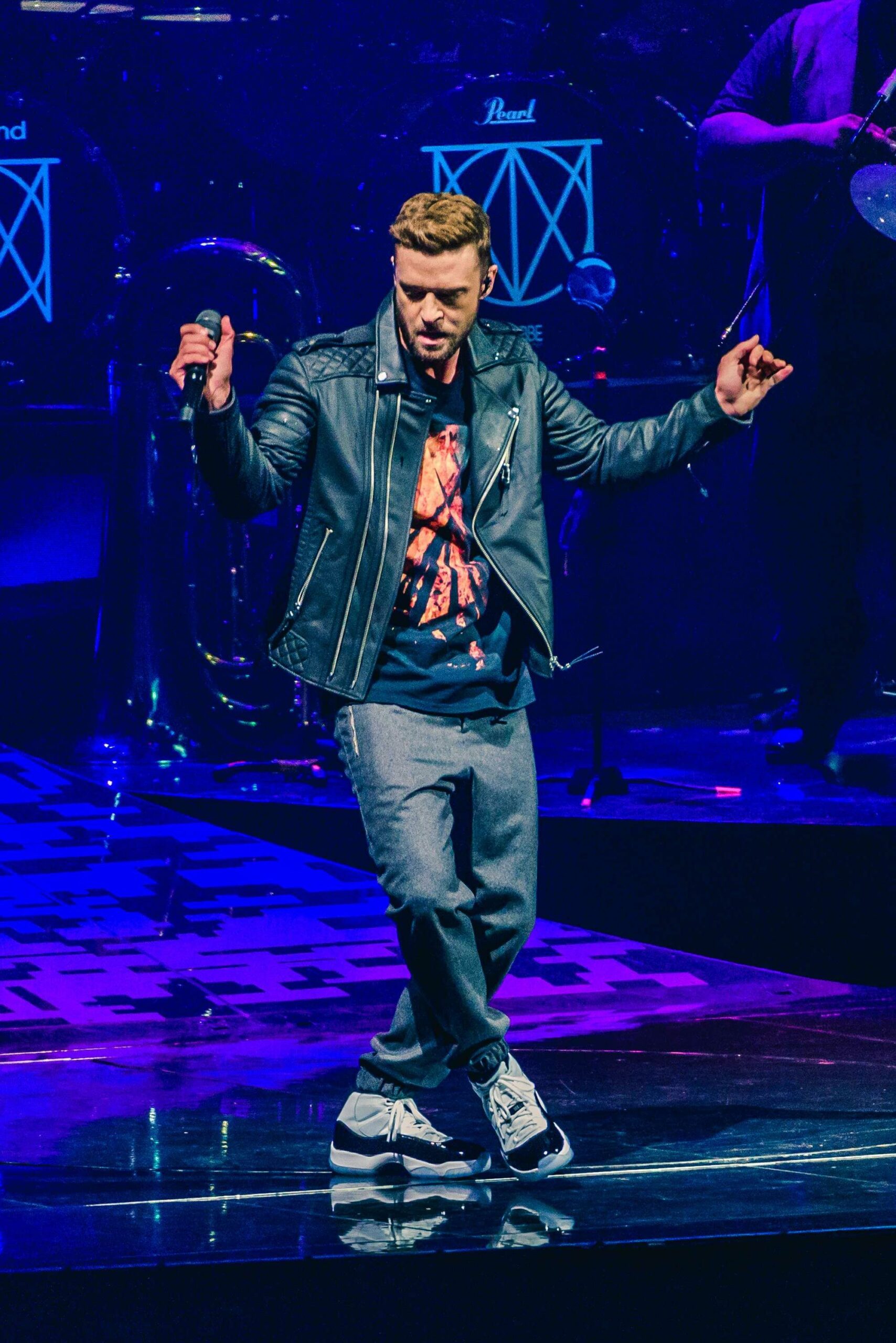 Photo by GP Images/Getty Images – Justin Timberlake
performs on stage during ‘The Man of the Woods Tour’ at Scotiabank Arena on October 9, 2018 in Toronto.
Justin Timberlake’s chart-topping turn on LIVE75 is based on an average of 14,976 sold tickets from six concerts in March led by a performance at Kansas City’s Sprint Center, the best-attended show of the six in this tally. The arena sold 17,528 tickets for a sold-out concert on March 21 with a gross totaling $2.6 million.
Ticket counts at the other five arenas were 16,676 at CHI Health Center in Omaha, Neb. and 15,466 at T-Mobile Arena in Las Vegas. Oakland’s Oracle Arena sold 15,352 tickets, and Detroit’s Little Caesars Arena had 13,092 sold seats. Lastly, Save Mart Center in Fresno, Calif., moved 11,745 tickets.
READ MORE: Introducing Pollstar’s LIVE75 Chart
Timberlake scores his No. 1 ranking on the chart just as his tour reached its finale on April 13, the last night of a two-show stint at Mohegan Sun Arena in Uncasville, Conn. With only a handful of boxoffice reports outstanding, revenue currently totals $207.1 million from the entire tour based on 1,621,615 sold tickets at 105 concerts. The tour has averaged $1.97 million in earnings per show since its launch 13 months ago, showing an increase in the average gross compared to his 20/20 Experience world tour that spanned 14 months. That tour averaged $1.76 million per show during its run from Nov. 2013 through the beginning of 2015. Attendance averages from Man of the Woods also show a slight increase over the 20/20 run with 15,443 tickets per show compared to 14,958 from five years ago.
Taking the second slot is Eric Church with a ticket average of 14,256 from four stops on his Double Down tour. Toronto’s Scotiabank Arena, Greensboro (N.C.) Coliseum, Allstate Arena in Rosemont, Ill. and Milwaukee’s Fiserv Forum all hosted the tour for two-night engagements during the chart’s eligibility time period. The country headliner is also this week’s NOISEMAKER with a three-position jump from No. 5 last week. Fleetwood Mac, Michael Bublé and Luke Combs also jumped three positions on the chart, but Church has the highest ticket sales average of the four. Notably, Fleetwood Mac is the touring artist with the highest gross average on the LIVE75. The band lands at No. 3 with a 14,182 ticket average, but the tour’s average gross of $2.1 million, noted on the chart in green text, from three concerts is tops.
Entering at No. 5 is country touring powerhouse Kenny Chesney, recently out of the gate with his Songs for the Saints tour that kicked off on April 4 at KFC Yum! Center in Louisville, Ky. With ticket sales averaging 12,296 from four concerts at three arenas, he takes the HOT SHOT designation as the highest ranked tour to hit the LIVE75 for the first time. He also played State Farm Center in Champaign, Ill., on April 5 followed by a two-show stint at Van Andel Arena in Grand Rapids, Mich., on April 6-7. Joining Chesney on the road are ‘90s country hitmaker David Lee Murphy along with newcomer Caroline Jones.
Pop star Shawn Mendes (No. 6) also debuts on the chart with the first boxoffice stats reported from the world tour supporting his most recent album, a self-titled project released last May. Named Shawn Mendes: The Tour, the trek began in early March. A total of 14 concerts from the tour’s opening European leg hits the chart, averaging 11,777 sold seats.
Comic John Crist drops to No. 42 from last week’s No. 28 ranking yet returns with a three-peat as the BREAKTHROUGH touring artist based on 15 sold out performances counted for this chart. Fellow Christian comedian Chonda Pierce (No. 70) has the most performances of any artist this week – a total of 19 shows in theaters and churches in U.S. cities with sellouts indicated in seven of them.
Check out this week’s LIVE75 chart by clicking here.
# Bob Allen# Caroline Jones# chonda-pierce# david-lee-murphy# eric-church# Fleetwood Mac# John Crist# Justin Timberlake# kenny-chesney# Luke Combs# michael-bublé# Shawn Mendes