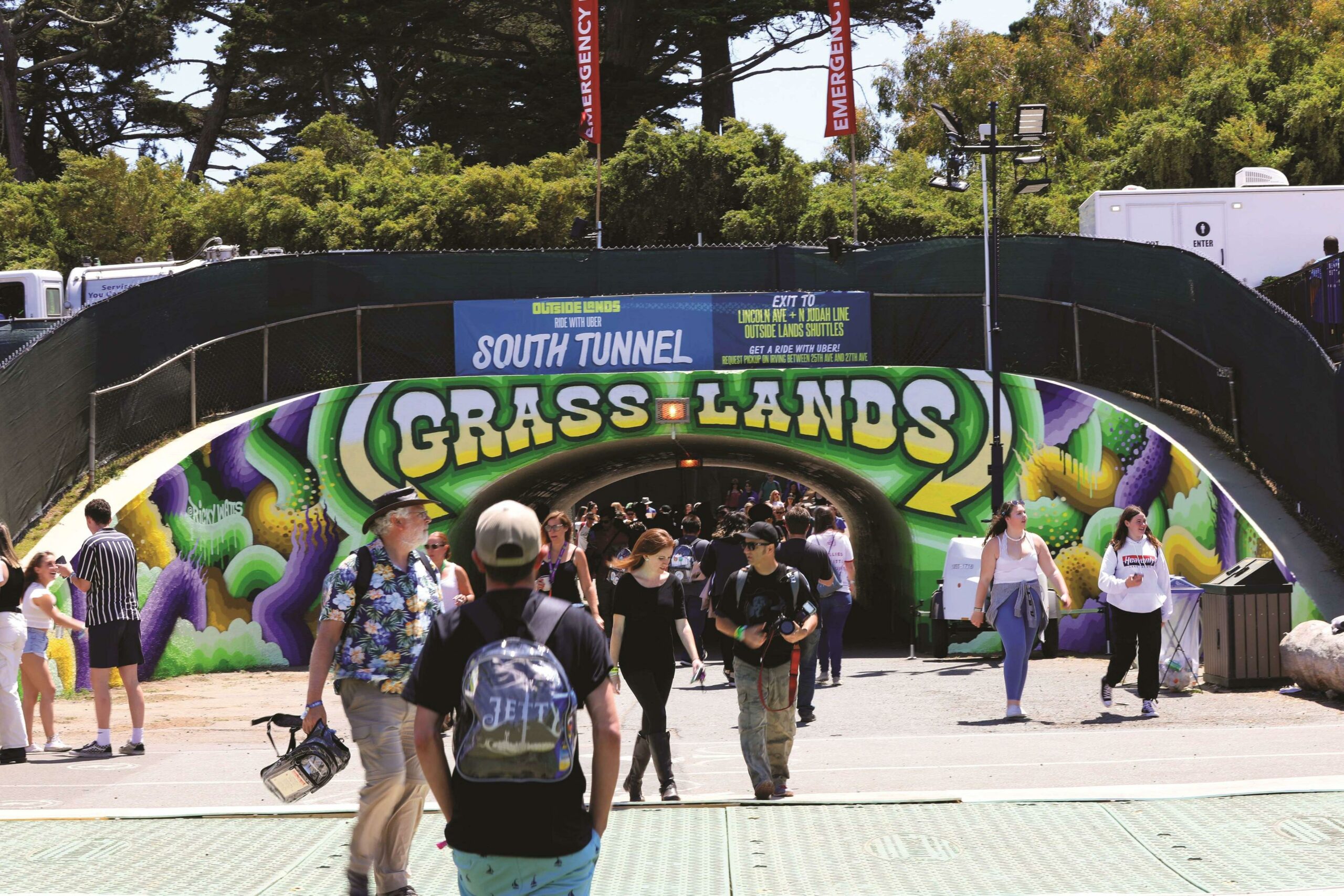 FilmMagic – Grass Lands
GOTTA KEEP ‘EM SEPARATED: Festivalgoers come and go through the South Tunnel of Golden Gate Park, which separated the cannabis-friendly Grass Lands area from the rest of Outside Lands Music and Arts Festival in San Francisco Aug. 9. Outside Lands is the first large, mainstream music festival to receive permits allowing the legal sale and use of recreational marijuana and cannabis products.

Imagine yourself attending a National Football League game and, at halftime, heading up the aisle to concessions and putting your order of THC-infused beer and a cannabis burger on your bank’s credit card before heading back to your seat to chill out with 70,000 of your best friends.

Jim Lewi heads up cannabis initiatives for Red Light Ventures/Starr Hill Presents, as well as the Emerald Cup cannabis-focused exhibition and festival, and believes that scenario is within the realm of possibility in the foreseeable future.
“Not like smoking a joint or vape pen per se, but maybe an infused water or soda,” Lewi explains. “All of the infrastructure already exists in these huge sports structures; there are already coolers, heaters, stoves, and pizza ovens, so you can do low-dose THC or CBD or a combination thereof for mixes in drinks. My point being, this will become standard operating procedure at all live events someday.”
Lewi, along with Moxie CEO Jordan Lam, whose company was a vendor in the Grass Lands section of the recently concluded Outside Lands festival in San Francisco and is also a producer of cannabis products; and Axiom Advisors partner Dustin Moore, a cannabis regulation consultant in California who managed the state’s Proposition 64 legalizing marijuana, spoke with Pollstar after the festival’s conclusion to consider the implications of legal cannabis and live entertainment.
After months of navigating regulatory terrain, jumping through bureaucratic hoops and overcoming logistical challenges, Outside Lands – produced by Another Planet Entertainment, Superfly, and Starr Hill Presents and with an assist from its cannabis-event partners – received its permits with two days to spare before opening the Golden Gate Park festival gates Aug. 9-11.
“It seems like it went off without a hitch on the consumers end,” Lam tells Pollstar. “There were the typical festival struggles of getting into the middle of a park to set up a booth and do all that fun stuff but it was exactly as it should have been. People who had never really gotten to experience cannabis firsthand before were learning a ton and enjoying their first experiences with their friends in a safe and normalized setting.”
See Also: Outside Lands Closes Out Three Days Of Music History, Tight Security And Legal Weed
Grass Lands, unlike Beer Lands, Wine Lands or Cheese Lands attractions, was designated 21-and-over for entry and cordoned off from the main festival ground by fencing, although it was adjacent to the Polo Field and Lands End main stage through a tunnel. Would-be patrons lined up and showed IDs to gain black wristbands and entry, and several “cannabis consumption” areas that had the ambience of smoky beer gardens dotted the fenced-off area, with festivalgoers relaxing at table with their accouterments of choice and coups of THC-infused brew. Lagunitas Brewing was on hand with its Hi-Fi Hops, a non-alcoholic beverage that, with either 5mg or 10mg of THC, could hardly be called “near-bear.”  At the “Farm to Bong” stand, one could learn to carve on’es own bong from an organic eggplant.
Vendors hawked gummies and chocolates, vaporizors and pens, as well as pre-rolled joints ($15 each) and patrons could smell the wares before buying with the help of a “smell wall” where potential customers could breathe in vaporized terpenes – the compounds in essential oils that provide taste and aroma. An oxygen bar provided a similar service, with patrons inhaling aromas like lavender and citrus from tubes.
“It was truly an historic moment and we are very excited to be a part of it and hope it marks the start of a lot more stuff like this where we can provide alternatives to alcohol for people out there to enjoy while listening to music,” Lam says.
That might take a while. While there’s money to be made on cannabis concessions, Lewi and Moore were unwilling to speculate about an estimate reported by the San Francisco Chronicle that Grass Lands generated more than $1 million in sales over three days.
Lam said that while he hadn’t received sales reports from distributors hired to operate vendor booths, he believes his booth would have sold out of 10,000 “dabs” (single doses of concentrated cannabis extract) and 10,000 “nugs” (trimmed plant buds) priced at $10 each that stocked Moxie’s booth. With close to 25 vendors onsite, one can do the math and see that seven figures is within the realm of possibility.
The monetary incentive is there, and the concert industry is taking notice. Starr Hill Presents, founded by Red Light Management’s Coran Capshaw, partners with The Emerald Cup as well as festivals like Outside Lands,
Agencies, including UTA with its recently announced representation deal with cannabis brand LEUNE and three years ago with High Times, are dipping toes in the water.  Artists like Snoop Dogg and Willie Nelson market their own strains of legal weed, but lesser known are the marketing efforts of artists including the Marley Family, STS9, Wiz Khalifa, Big Gigantic, Melissa Etheridge, Gene Simmons, Ghostface Killah, The Game, and Method Man and Redman. 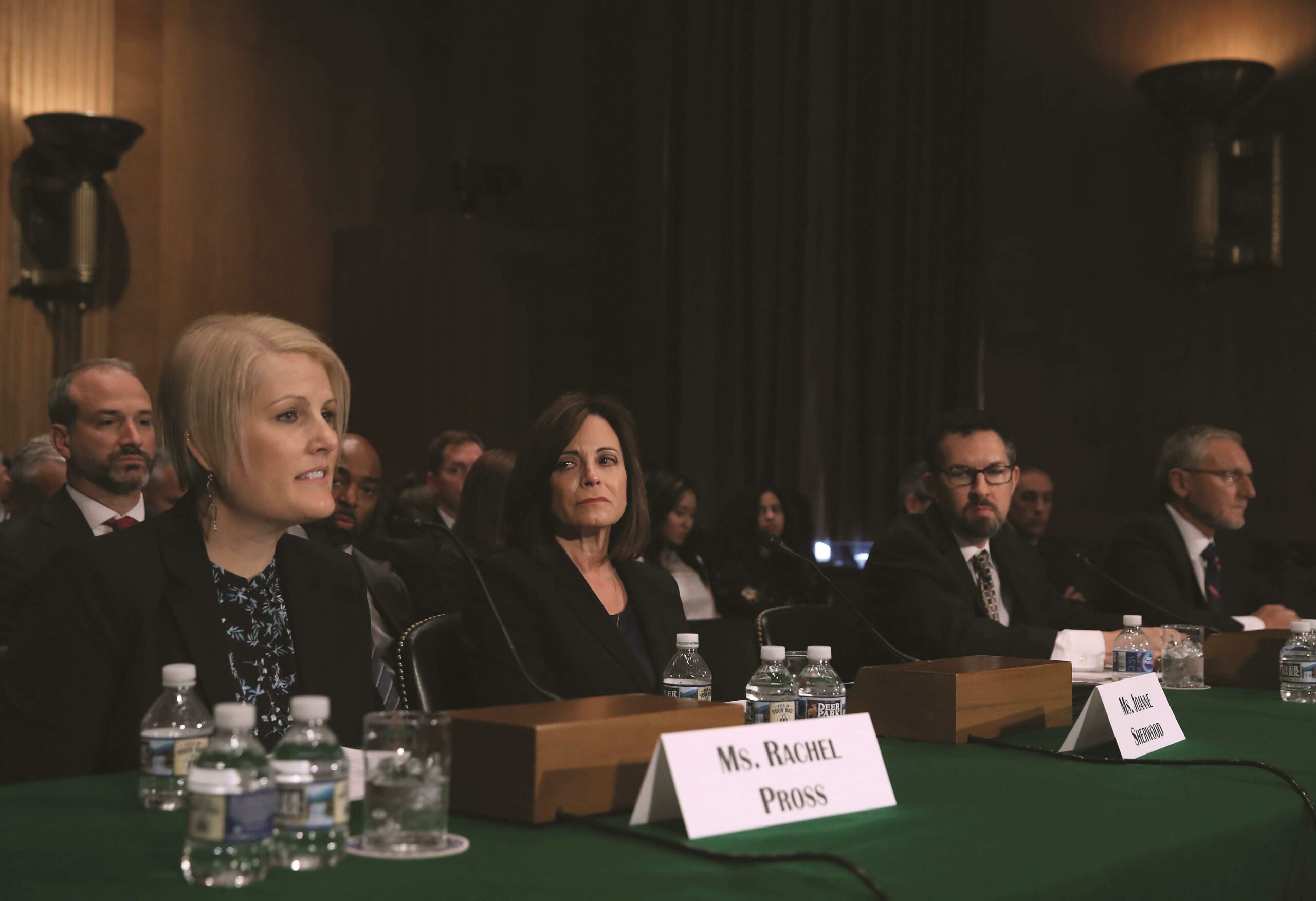 Mark Wilson/Getty Images – BANKING ON WEED
The Senate Banking, Housing and Urban Affairs Committee hears from (L-R), Rachel Pross, chief risk officer at the Maps Credit Union, Joanne Sherwood, president and CEO of Citywide Banks, Garth Van Meter, vice president of government affairs at Smart Approaches to Marijuana, and John Lord, CEO and owner of LivWell Enlightened Health, discuss the challenges of legal cannabis and banking in Washington, D.C., July 23.
But the political will to legalize cannabis and ease federal banking restrictions currently make it difficult for such businesses to function normally. Lewi, Moore and Lam are optimistic and the U.S. Senate Banking, Housing and Urban Affairs Committee had hearings in July on the subject.
Cannabis is fully legalized in California, Oregon, Washington, Nevada, Colorado, Michigan, Maine, Vermont, Massachusetts, Alaska and in Washington, D.C., but criminalized to varying degrees in the rest of the individual U.S. states.
The higher hurdle is that of federal decriminalization, especially as it affects banking. Because it remains a Schedule I drug at the federal level, federally insured banks are barred from doing business with cannabis companies including manufacturers and dispensaries.
Until federal banking restrictions are lifted, neither Lewi nor Moore believe major players – at least not publicly traded companies like Live Nation – will touch festival cannabis concessions in any location. Reps for Live Nation and C3 Presents declined to comment for this story.
The National Association of State Treasurers adopted a resolution May 24 calling for “common-sense federal laws and regulations” for companies in states that have legalized cannabis that are forced to operate as mostly cash businesses.
This is where Moore comes in. Though he didn’t want to be quoted directly, he provided background on lobbying efforts as well as information about the permitting process in both city and county of San Francisco as well as the State of California, and is considered an expert on loosening the Gordian knot of California political bureaucracies and regulatory bodies.
At least in San Francisco, being able to fire up the cash registers and move product is more complicated then simply pulling a permit or license from the city and county Office of Cannabis and California’s Bureau of Cannabis Control. There’s compliance matters with  local health, fire and police departments to satisfy and, depending on which neighborhood an event takes place in, neighborhood bodies to satisfy as well. Lewi believes a lot of skepticism can be overcome with education.
“There’s no reason why any concert or any event shouldn’t be able to pull a license and sell cannabis products at their shows,” Lewi says. “I can’t speak to everyone’s event but I can speak to the Emerald Cup (an annual cannabis-focused festival in Santa Rosa, Calif.). When you look at the number of arrests that happen at a rock show or a country music show, or the number of transports to the hospital, when you look at the Emerald Cup – knock on wood – you’ll see some amazing statistics.
“In the past three years that I’ve been involved in the Emerald Cup, we’ve had zero arrests. One trip to the hospital. No complaints from neighbors. I think that as education continues, people will lean more on cannabis, cannabis-infused products, and less on alcohol,” Lewi says.
Lam generally agrees with Lewi’s assessment and enthusiasm.
“The funny thing about it is there’s been plenty of [cannabis] events that have been essentially the same thing,” Lam explains. “They’ve been permitted [for usage and sales] already up to this point, but because [Outside Lands] was what it was, because there were so many people, it is so mainstream and in the middle of San Francisco in the park, it was treated like it was earth shattering from a regulatory perspective.
“I don’t know that it was, but [receiving final permits] was definitely down to the wire because there’s a lot of stakeholders who play here. There’s the local community, the local and state governments. Then you have the exhibitors and the festival itself and security and there’s a lot of moving parts. I always joke that cannabis is more heavily regulated than the food you eat. If you think of that, and then do something on this scale for the first time, there’s just a lot that goes into it and luckily we’re working the kinks out in order to make it better next year.”
Reps for Another Planet didn’t respond to an interview request, and a spokeswoman for Superfly said the company would not comment  about future festivals and cannabis. But those who Pollstar spoke to with knowledge of the subject said they believed Grass Lands would be back in 2020, consumption areas and all.
“It probably would have been even more successful if all of us operators had not struggled with the typical first-year event things, like ‘Oh my gosh, where’s the inventory’ or, ‘The register’s not working right’ so I think next year is just going to be gangbusters,” Lam says. “People were so interested and it was like a village. It was crackin’. We had a line almost the whole time of people checking out what we were doing. It was very fun.”
Lewi is more than ready for smokin’ future.
“There is a vision that at some point, [anti-cannabis regulation] is going to change federally … then the people who can’t do this in our industry, like the Live Nations and AEGs and Spectacors, and people who run venues, will come in. It’s my belief that in the foreseeable future you will be able to go to a football game and consume cannabis.
“We’re going to be the Aramark of cannabis. We wanted to name ourselves Cannamark, but it was already taken,” he said, laughing.
# "Outside Lands Music & Arts Festival"# Another Planet Entertainment# Deborah Speer# snoop-dogg# Starr Hill Presents# Superfly# Willie Nelson