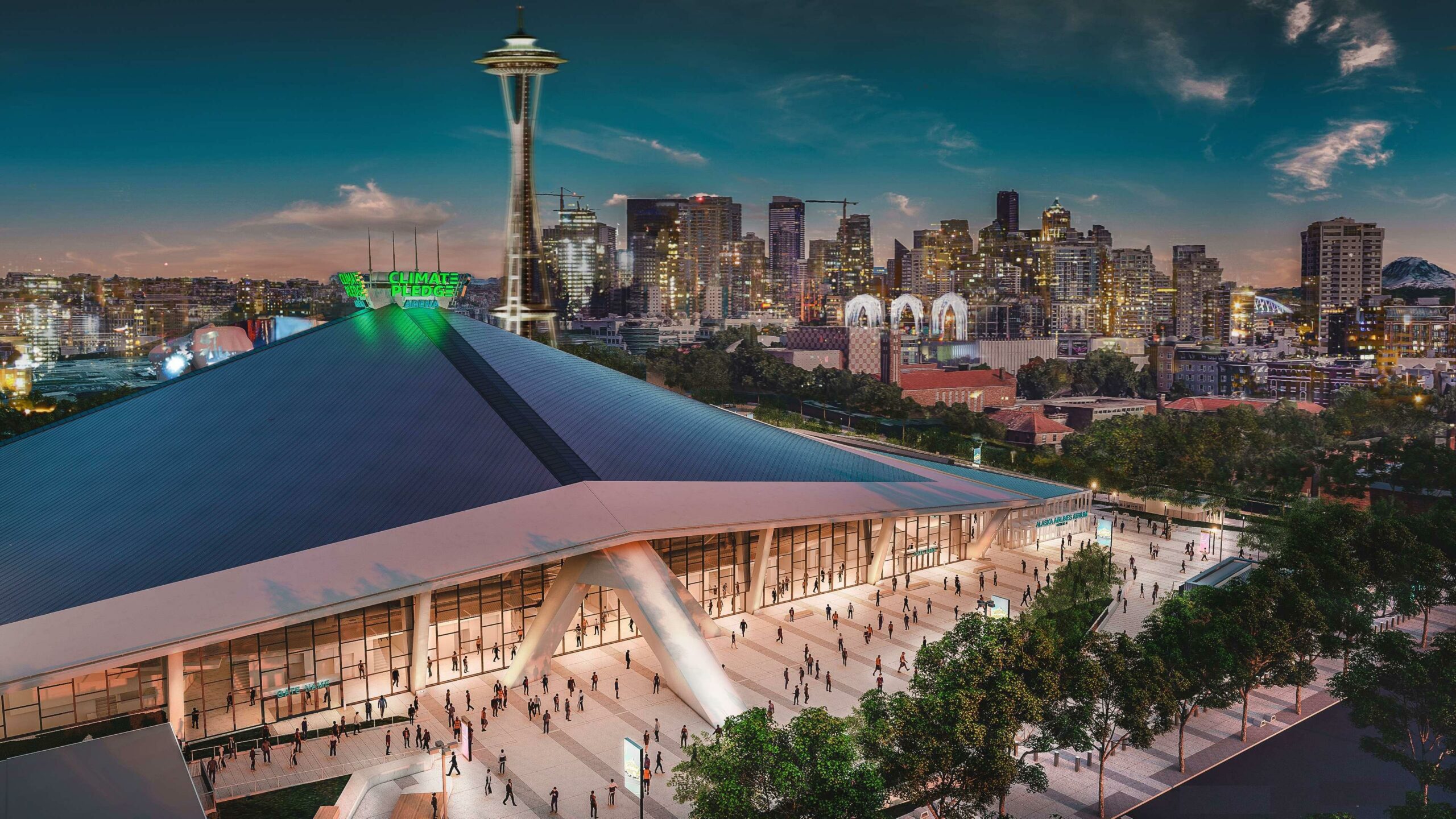 Amazon has acquired naming rights to the NHL Seattle arena, which will officially be named Climate Pledge Arena. The venue is poised to set a new benchmark in sports and entertainment as the first carbon-neutral venue powered 100% by renewable electricity, down to the Zamboni shaving the ice floor.

Climate Pledge Arena ties in with the agreement Amazon signed in 2019 with activist group Global Optimism to push for corporate America to achieve net zero carbon by 2040. Separately, Amazon announced this week The Climate Pledge Fund, a $2 billion venture capital fund it has launched to invest in clean energy.

In Seattle, the deal is a partnership between Amazon, NHL Seattle and arena developer Oak View Group, which is funding the massive reconstruction of old KeyArena, a project that has now reached the $1 billion threshold due in part to the upgrades required for carbon neutral status.

Tim Leiweke, CEO of Oak View Group, owner of Pollstar and VenuesNow, would not disclose the financial terms of the deal, but naming rights for big league arenas typically extend 20 years.

“It’s a good deal; it worked out well for both sides,” Leiweke said. “The biggest winner is the planet.”

Sources said the total value runs between $300 million and $400 million, which places Climate Pledge Arena among the richest deals for a big league arena.

The branding aspect for Climate Pledge Arena brings a twist to the traditional naming rights model as officials strive to develop the first zero carbon arena certified by the Living Future Institute, a nonprofit dedicated to promoting sustainable building practices.

Amazon, a trillion dollar Seattle company and the world’s No. 1 online retailer, won’t have its name on the arena when it opens for the 2021-22 NHL season. Instead, it’s spreading a brand message of sustainability for the world’s most progressive and responsible arena, Leiweke said.

The Amazon brand is known worldwide and it wasn’t a priority for them to put it on the building, he said. It was more important to spotlight the issue of climate change in a city at the forefront of addressing it. As part of the effort, Amazon and OVG had to get other arena sponsors on board with the zero carbon mission and nonprofit entities had to certify the process, which wasn’t an easy process, Leiweke said.

For Leiweke, it’s the most complicated deal to date over his 40-year career, considering all the elements converging to form the greenest platform in sports and entertainment. The timing was right, though. The pandemic made it difficult to focus during the final stages of negotiation, Leiweke said, but at the same, the COVID-19 age is another indication of what’s needed to fix the planet and made it imperative to get the deal done.

“This was an idea that took root in conversations over the last six months, and what we all agreed is it’s critical for our industry to acknowledge our planet is sick and it is our obligation to heal it,” he said. “There is no other marketplace in the world to set this precedent, create this platform and form a new vision for where we need to go as facility operators, musicians and athletes than Seattle.”

On the other side of the table, Amazon worked on the deal in-house with no outside agency involved. From start to finish, there were about 40 company executives involved over the course of the 12 months of discussions, Leiweke said.

Amazon officials were not available for comment other than a prepared statement from Jeff Bezos, its founder and CEO. The name Climate Pledge Arena serves as a “regular reminder of the importance of fighting climate change,” Bezos said in the statement.

Elsewhere in sports, Amazon Web Services, the company’s data analytics group, has done tech deals with Major League Baseball, Formula 1 and the Los Angeles Clippers’ CourtVision digital experience, but for Amazon as a whole, nothing to the magnitude of Seattle.

“They’re wicked smart people and they built these negotiation models and are very savvy at it,” he said. “Where most people have probably failed in the past with Amazon as it relates to these types of deals is that there wasn’t a bigger idea attached to it. The idea to push an agenda that has the ability to reach a far greater number of people outside of sports and entertainment, that’s what made it work. If it was just Amazon branding, it wouldn’t make a lot of sense to them and they would pass.”

For Amazon, their assets expand to every part of the arena as it relates to pushing the envelope on green buildings, whether it’s the rainwater used to form the ice surface for NHL games or removing all fossil fuels from the building, which is unprecedented for a sports facility.

“Instead of negotiating the assets, we’ve been brainstorming: What if we did this? What if we did that?” said Tod Leiweke, president and CEO of NHL Seattle and Tim’s brother. “Every day, we get to promote this idea of a sustainable world. It’s a beautiful vision, that we can change the course of what’s happened to our planet and dream of having a zero-carbon footprint. It’s going to require investment and policy, but it’s absolutely possible.”

To make it happen, OVG hired Seattle architect Jason McLennan in late 2019 as chief sustainability consultant. McLennan, CEO of McLennan Design, has specialized in sustainable design for 20 years. Several years ago, McLennan worked with Tod Leiweke to develop a health and wellness standard for the mixed-use district next to Amalie Arena, home of the Tampa Bay Lightning. Tod Leiweke spent five years as the Lightning’s CEO.

By virtue of its building type, arenas waste a ton of energy, which presents a stiff challenge in Seattle for going carbon-neutral, given the city’s leading role for promoting sustainability. Some experts feel it’s impossible to achieve a carbon-free footprint, but advances in technology over the past decade have made it do-able now at a lower cost, McLennan said.

The biggest challenge was to “decarbonize” the building by removing all infrastructure connected to natural gas, which venues typically use for heating, dehumidification and cooking. Replacing it with what is now a fully electrical system was a “big lift” for OVG, and something that has not been done before in the big leagues, McLennan said.

“It’s ambitious and it changes the way you construct the building due to the fact that gas won’t be a part of it,” Tod Leiweke said.

Installing solar panels on the roof of the arena’s entry pavilion and a parking garage, plus investing in renewable energy to provide 100% of electricity use connected to an off-site solar farm was another step in the process. The cost of utility-scale solar energy has dropped dramatically over the last few years, which helps, he said.

“Going even further than that —  this is something most projects when they claim to be net zero are talking about the building —  we are calculating the carbon footprints  of all the associated emissions from transportation to and from the arena for all events, and offsetting that with carbon offsets as well,” McLennan said.

In addition, 95% of all arena waste will be diverted from landfills and 75% of the venue’s food program will be sourced locally.

Single-use plastic will be eliminated by 2024. The prospect of self-serve systems phasing out post-COVID has some arena operators such as Sprint Center’s Brenda Tinnen saying plastic straws and lids will come back, but McLennan said compostable options are available.

The arena roof, the only piece of the original KeyArena structure that remains intact as part of the reconstruction and is protected as a historic landmark, helps reduce the building’s carbon footprint by not having to build a new roof.

The electric Zamboni is a perfect concept, considering the short runs it makes to clean the ice surface before going back under the stands to be recharged, McLennan said.

“When people see what you can do at this scale, it opens up the possibilities and puts pressure on the entire industry that we have to do things differently and be part of the solution,” McLennan said. “It starts removing many of the excuses people had for looking at things like renewable energy and water conservation all of these other things, and say ‘Look, it’s time to do this.’”

On the music side, OVG will ask touring acts to purchase carbon credits on the nights they perform at Climate Pledge Arena to offset the emissions tied to the buses and planes they use for transportation. That aspect is separate from the naming rights agreement, Tim Leiweke said.

Meanwhile the concert industry is welcoming the upgraded building to the Seattle market. “It’ll be amazing to have another professional building in Seattle,” says Dennis Arfa, founder and chairman of Artist Group International. “We book our tours in the region with Seattle in mind because it’s one of the biggest markets in the country and the most important market in the Northwest. And it’s a music-loving town. Billy Joel sold out his stadium date there a few years ago and this year Def Leppard and Motley Crue sold out their stadium date. It’s great for the community there, great for music, great for sports “

“Seattle’s sadly been behind the curve as far as having a major arena that can handle massive production,” added Dan Steinberg, co-founder of Emporium Presents, who‘s promoted shows in the market for 20 years. “I can’t tell you how many times I’ve seen artists come play the Key Arena and say it was exactly the same venue they had played decades earlier. Seattle is the anchor for Northwest bookings and it’s ridiculous that for years we haven’t had a state-of-art arena here.”

All told, the new deal is in keeping with the legacy of an arena originally built for the 1962 World’s Fair, Tod Leiweke said. “The building had a soul when it opened, so we had a great head start on this issue and we are proud to save this building instead of throwing it out,” he said. “For our fans, we could have put a corporate name up, but now they’ll come to our arena and see that there’s this wonderful purpose for every game and event. It’s a powerful step.”