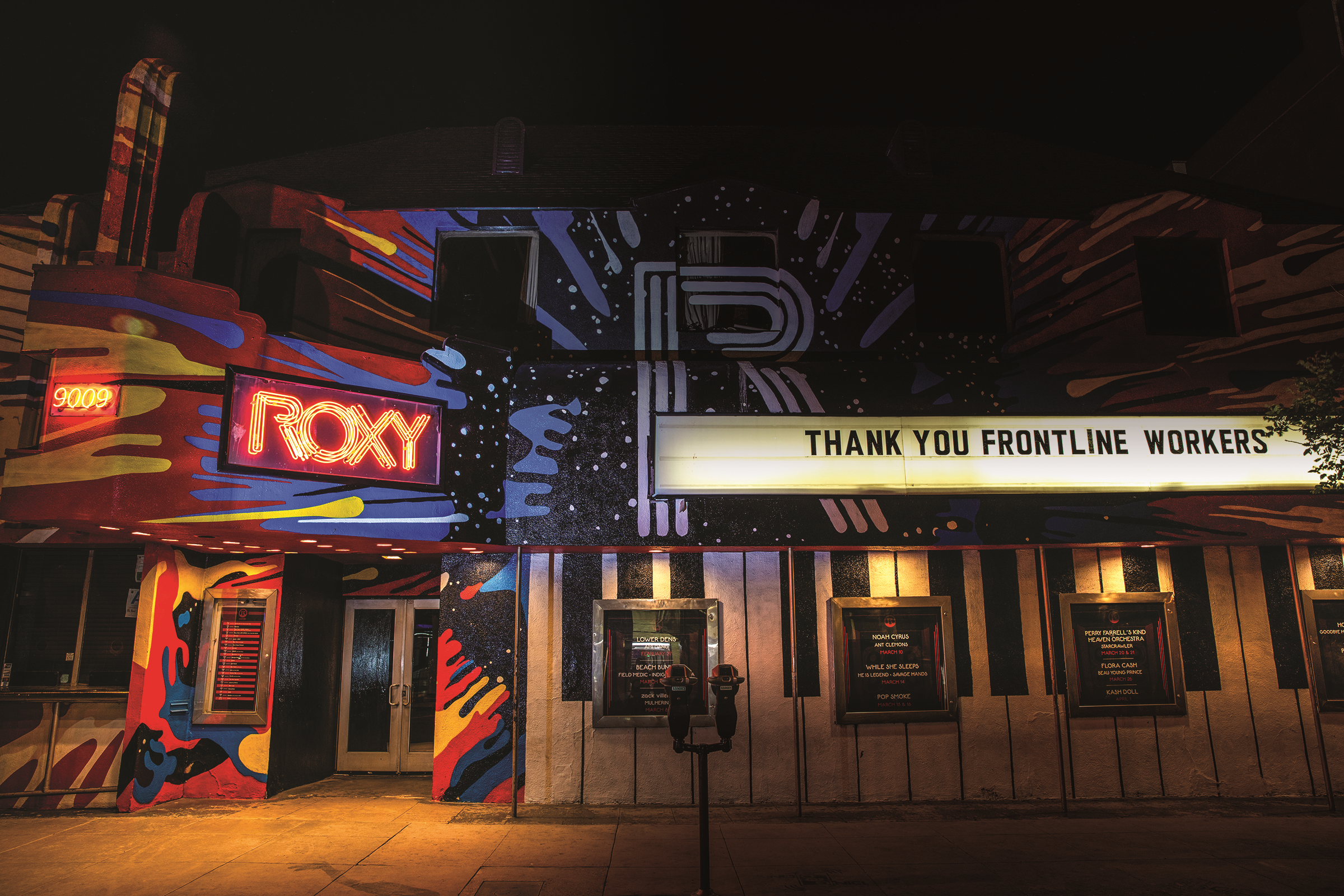 Jay L. Clendenin / Los Angeles Times / Getty Images – The Roxy Theatre,
on the Sunset Strip, has Thank You Frontline Workers on the marquee, during the coronavirus pandemic.
No aspect of the live industry was hit harder by the coronavirus pandemic than venues themselves. While artists and other members of the live ecosystem have partly offset lost touring revenue with livestreams and other new content, venues saw income halt suddenly and almost completely in mid-March, when most public gatherings were banned under sweeping health restrictions.
Initially, the live business stayed afloat with meager government aid and charitable efforts – but relief has long since dried up, with lawmakers failing repeatedly in recent months to pass additional legislation to bail out the live industry and other sectors impacted by the pandemic.
But as the months dragged on, the National Independent Venue Association (NIVA) has provided a beacon of hope during challenging times for venues across the country.
More than 2,900 independent venues have banded together since NIVA formed in the pandemic’s early days, uniting spaces of all sizes to fight for their future.
“There hasn’t been an association of independent venues and promoters in the past, because the very nature of it is to be independent,” Marauder Group’s Rev. Moose, who co-founded NIVA and is its executive director, told Pollstar in November. “If one person thinks about an independent venue as a dark rock ’n’ roll club, when another one thinks of it as a storied comedy club and another one thinks of it as an open-air amphitheater, they’re all correct.”
Independent venues touch communities across the country, from America’s densest metropolises to its far-flung rural enclaves, and NIVA’s chief initiative has been championing the Save Our Stages Act, federal legislation designed to provide relief to spaces of all stripes.
In an era of waning bipartisanship, the legislation had attracted 226 cosponsors at press time – 171 in the House of Representatives, 55 in the Senate – ranging from Vice President-Elect Kamala Harris (D-Calif.) to Sen. Lindsey Graham (R-N.C.). In September, more than 1,500 venues lit themselves in red to demonstrate the situation’s urgency to lawmakers.
“This isn’t a red or blue issue – it’s a green issue,” NIVA board president Dayna Frank, who also serves as CEO of Minnesota’s First Avenue Productions, told VenuesNow in September. “It’s not a big city issue; it’s an Everytown, USA, issue. Lawmakers throughout the country are recognizing that we need to save our Main Streets and save our local communities.”
Once venues do return – the ones that survive the financial adversity wrought by the pandemic – they’ll have plenty of innovations to draw on to assuage a public filled with both pent-up interest in live music and fear of the coronavirus. Improved rapid testing will help screen out sick patrons at the point of entry, while advancements in drone sanitization and ventilation will help curb the spread of pathogens, even indoors. Contactless concessions and ticketing will further reduce transmission, and new accreditation initiatives such as the Global Biorisk Advisory Council STAR program and the International Well Building Institute’s Well Advisory on Sports and Entertainment Venues will reassure consumers that the venues they frequent are safe. Simultaneously, the Event Safety Alliance has developed guidelines throughout the pandemic to advise spaces considering reopening of best practices to maximize safety.
Meanwhile, unusual ideas – like The Flaming Lips’ bubble concerts or Production Club’s space-age Micrashell suits – will continue to percolate and offer new ways to remain safe at public gatherings.
And the venues themselves will be strengthened by the newfound solidarity that NIVA has sparked.
“It’s more difficult to run a business by yourself,” Moose said. “Knowing that you have a support network, and knowing that you’re not going through it alone makes it a lot easier.”s
# Eric Renner Brown