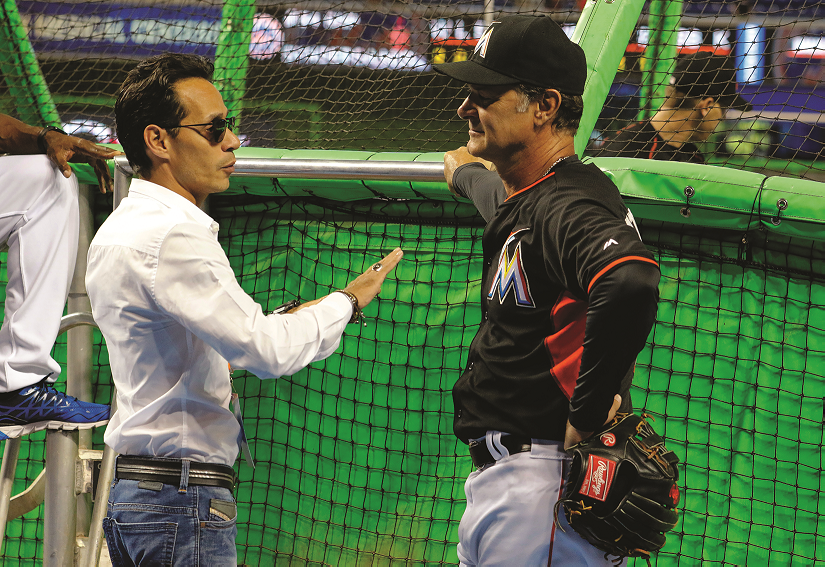 Joe Skipper / Getty Images – Marc Anthony
speaking with Manager Don Mattingly of the Miami Marlins before the Marlins played the New York Mets at Marlins Park on June 3, 2016 in Miami. Anthony’s Magnus Media has in six years developed a substantial presence in numerous fields, including representation and management of many musicians and athletes, particularly baseball players.
Today, Marc Anthony’s Magnus Media, LLC is a massive company with many different branches and areas of business. A diversified entertainment and sports enterprise, Magnus represents and manages athletes and artists, has its own recording label and music publishing company, produces television and digital content, and provides marketing services.
The company was founded in 2015 when Anthony joined forces with Michel Vega, who was already a partner at WME and had opened the agency’s Miami, Florida, office a decade earlier.
“I had been an agent for 25 years and was looking for a new challenge,” Vega explains. “Marc was eager to build something more far-reaching for the future that would involve being able to give back to other artists for future generations. We wanted to put together a company that was built from scratch with the new reality of the digital universe we are in, where we were could leverage the fact that content creators, now, in the digital world have a much different means to empower themselves.”
The two quickly put together a team including COO Felipe Pimiento, who had previously helped Anthony produce “¡Q’Viva! The Chosen.”
“I was in Colombia on holiday and Marc happened to be in town to do a show, we started talking, and he had started thinking about what he wanted to do in the next stage of his career, and he wanted to restructure everything around his management company,” Pimiento recalls. “Once we announced we were launching Magnus … we  moved everybody to Miami.”
Some of the artists managed by Magnus include  Anthony, Gente De Zona, Fonseca, and Enrique Santos. The Magnus Talent Agency does the separate and often interrelated work of booking clients like Mau Y Ricky and Il Volo. But an area Magnus expanded in rapidly is athlete representation, as the company has accumulated a substantial roster of active big leaguers, rising stars and legendary players including Aroldis Chapman, Manny Ramirez, Iván“Pudge” Rodriguez, Juan Uribe, Raisel Iglesias, Starlin Castro, Luis Robert, Carlos Zambrano, Vladimir Guerrero Jr.
A key to the company’s success in this field has been finding great business partners to add to the family, which include CEO of Magnus Baseball Barry Praver and President of Magnus Baseball Scott Shapiro.
“Marc loves baseball and when we met our future partners, we looked at the baseball representation business, and even though 38% of MLB players are Latino, there wasn’t one company that was specializing in these amazing athletes,” Vega said. “Therefore, many times you have a situation where somebody at the top of their field is making tens of millions of dollars a year, but is not effectively able to communicate with the most important professional in their life. There is a language and also a cultural barrier. So when we opened up, I think that resonated with a lot of the players.”
Magnus also recently partnered with Sofía Vergara’s Latin World Entertainment to co-manage and book the music related-business of LatinWE clients, and are working with VIS Entertainment to develop multiple scripted projects through Magnus’s content division.