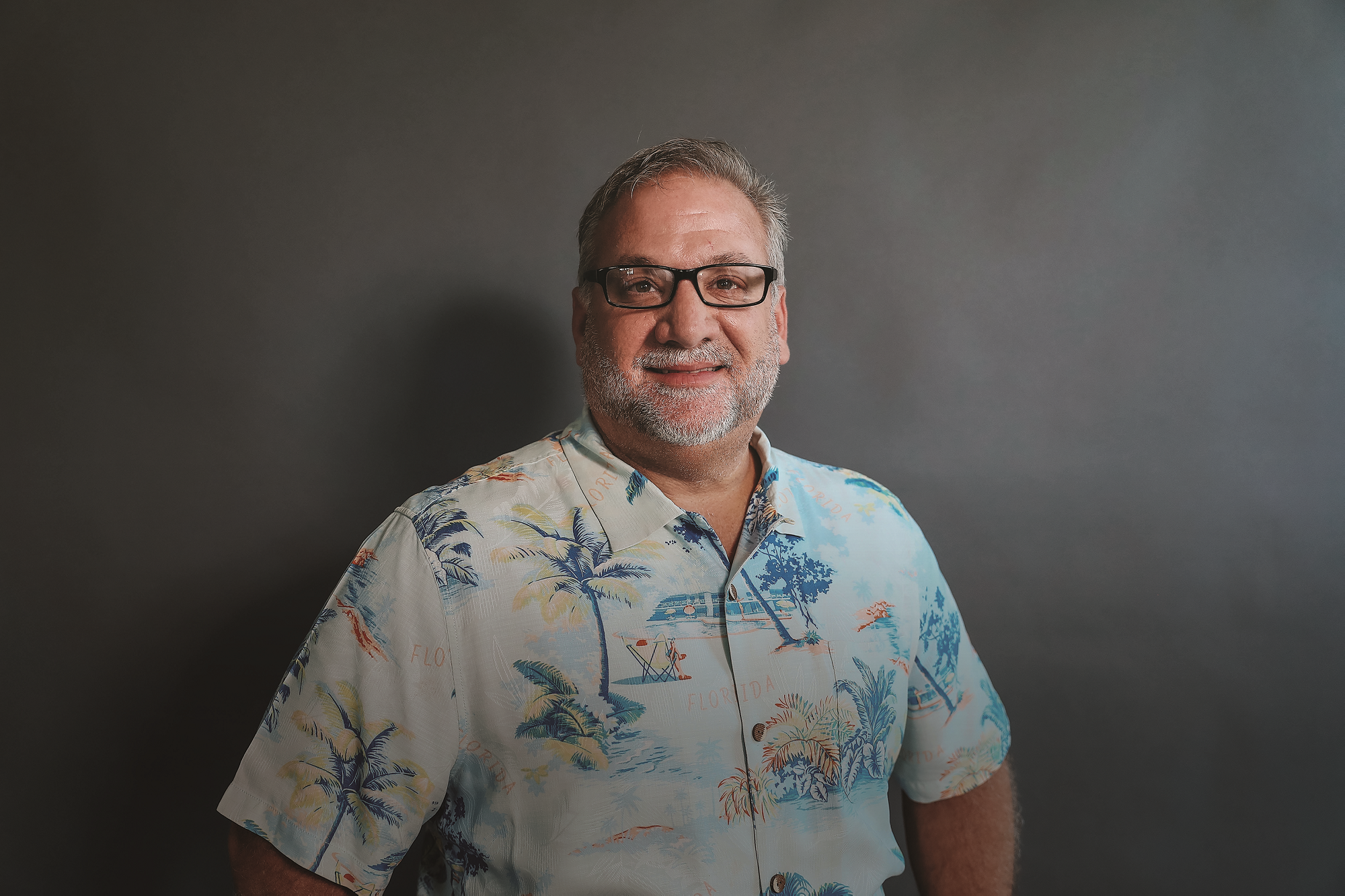 Courtesy Dan Fife –
Dan Fife, founder and president of Awakening Events, is proud he didn’t have one layoff, furlough or payroll reduction and kept his team working with some 250 events over the past year.

Despite so much adversity for the live industry over the last year, promoter Awakening Events has, relatively speaking, had a heck of a year – not that its staff would have ever chosen to have it come about this way.

The Franklin, Tenn.-based promoter topped Pollstar’s mid-year North American chart with its “Drive-In Theater Tour” featuring TobyMac, Zach Williams, Mac Powell, CAIN, Jordan Feliz and Colton Dixon, among others, and grossed nearly $3 million. Additionally, “The Hits Deep Tour,” also featuring TobyMac, came in at No. 4 while other Awakening artists to make the survey included Chonda Pierce (No. 31), Skillet (No. 35), Zach Williams (No. 56) and Steven Curtis Chapman / Big Daddy Weave (No. 60).
“What made all the difference for us was really focusing on what we can do instead of what we can’t,” says Awakening Events founder and president Dan Fife, who quickly pivoted to drive-ins in 2020, resulting in some 250 events in the last year with four self-contained productions going out simultaneously. “We rotated these artists around the country and created something that I referred to as ‘base hits.’”
Fife’s small-ball approach didn’t only win the World Series, but led to home runs throughout Pollstar’s mid-year charts. Pollstar caught up with Fife to find out how Awakening did it despite varying health directives, limited capacities, and trepidatious fans.
Pollstar: What’s the secret to all your mid-year success?
Dan Fife: I’m going to tell you, it’s relationships. It’s having a solid team that’s focused and willing to get their hands dirty. Over the years, we’ve worked at some of the most prestigious venues, Madison Square Garden, Red Rocks, The Forum, you name it. At the same time, our team is willing to roll their sleeves up and do what might not look as pretty, and because of that, I’m proud to say Awakening Events didn’t have one layoff or furlough or payroll reduction or any of those that others faced since our March 13, 2020, shutdown.
How many people are on your team?
We have 19 full-time employees, but it’s the entire Awakening Events team and family. Part of the goal over the last 15, 16, 17 months has been not just the full-time employees, but that next circle of key contract labor relationships and key production company relationships we have, like Nitetrain busing and different people. [From] June of 2020 until wrapping up this week, June of 2021, we’ve done close to 250 drive-in theater events around the country. 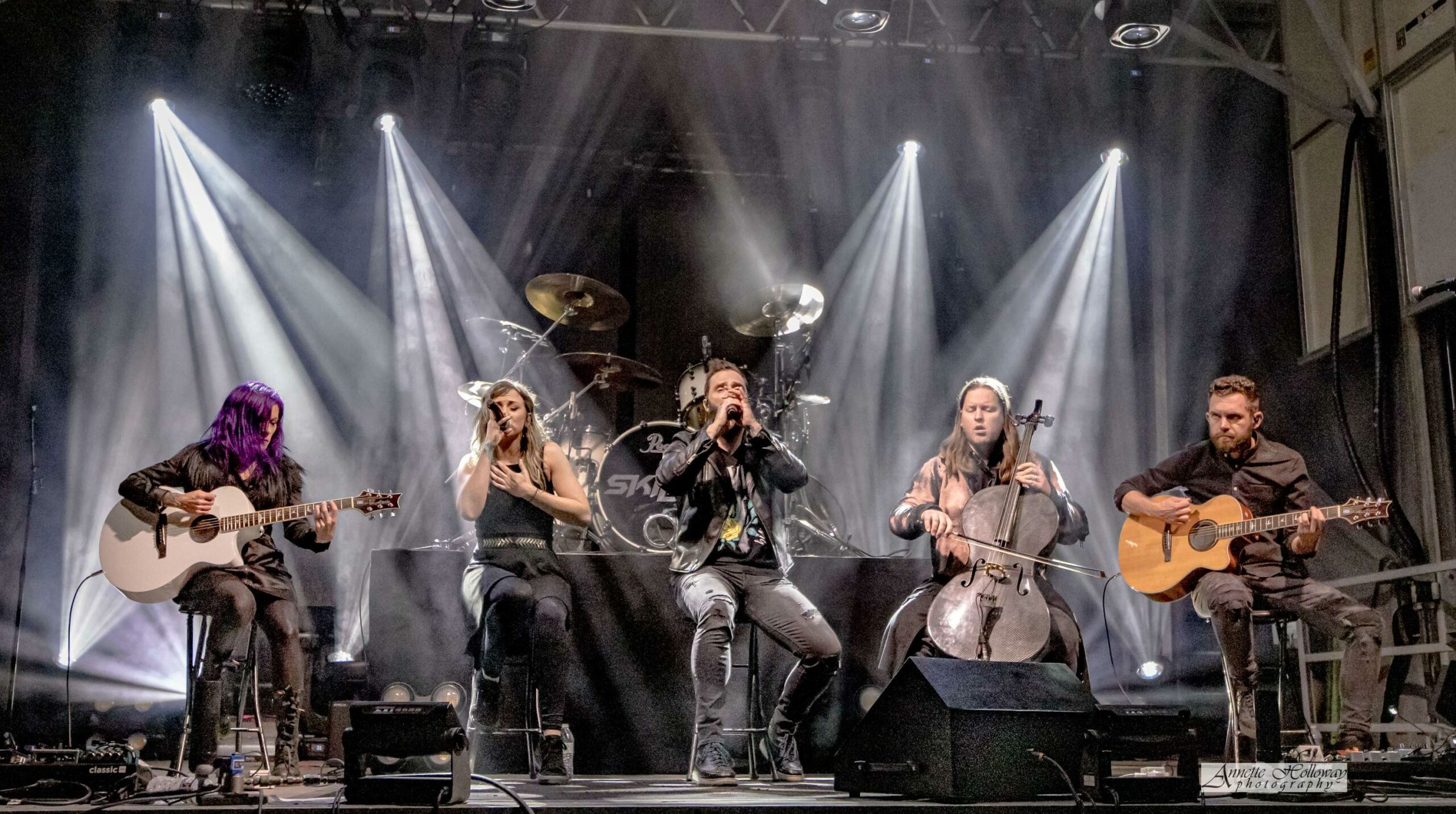 Annette Holloway –
Skillet, whose tour was promoted by Awakening Events, perform at a drive-in in Roanoke Rapids, NC.

Last year, we ran June to October. This year we ran the last weekend of March up ‘til June, right now. And in 2021, during this mid-year issue time period, TobyMac, who’s been a longtime partner of ours, and his team. His management company is True Artist Management here in Nashville. His agency is Platform Artists, Bryan Myers and Tony Johnsen. But Dan Laurie at True Artist and Tony, they’re key partners. We do all of Toby’s main touring. Normally, our year looks like a big arena tour in the spring and we do a theater run in the fall. We do a series down in Austin at a small amphitheater that’s an eight- or nine-show series. And then I’ve got the [First Security Amphitheater] in Little Rock that we manage and have about six shows this summer in.
What was your business philosophy from the beginning once this thing hit in terms of keeping things moving?
We stopped on March 13 like everybody else and actually had the show loaded in and decided at 3 p.m. we’re not playing. We sold out Simmons Bank Arena. On the 15th, I gathered everybody up for the 5:30 p.m. call – just a normal conference call, everybody wasn’t Zooming then – and said, “Hey, I don’t know how long this thing’s gonna last, but I know we need to take advantage of the time. I want you to know you’re going to be okay. We’re stable. We’re a debt-free, independent company. Don’t worry. Let’s take this time to do some of the things that we normally don’t stop to do when you’re doing 350-plus shows a year.”
How did the drive-ins start?
Dave Wagner, who manages the Newsboys, at the same time we saw a picture of some artists over in Denmark that did a pop-up acoustic show at a drive-in. And just like, “boom!” We started looking at it. We pulled everybody in and found out there’s 335 working drive-ins in North America and repurposed some of our team starting about April 1 and broke into some drive-in theater owner networks. We started running numbers, talking to a staging company and looked at being completely self-contained, down to carrying our own generator.
How many productions did you have going out at once?
We had four out at one time.
And only 19 people on your team?
We had it down to where it was basically three buses for each tour plus a truck driver, and a stage truck driver.
It sounds like you turned it into a volume business.
That’s right. Part of the strategy was we went to places that we would never go to. We’re all jockeying for the same theaters, arenas and performance halls, it doesn’t matter what genre you are in, you’re coming through the same cities. But one of the things that we saw over and over was families coming out. They’re holding up posters with kids that said, “This is my first concert and loved it.” There were many bright moments where you saw really great things happen. 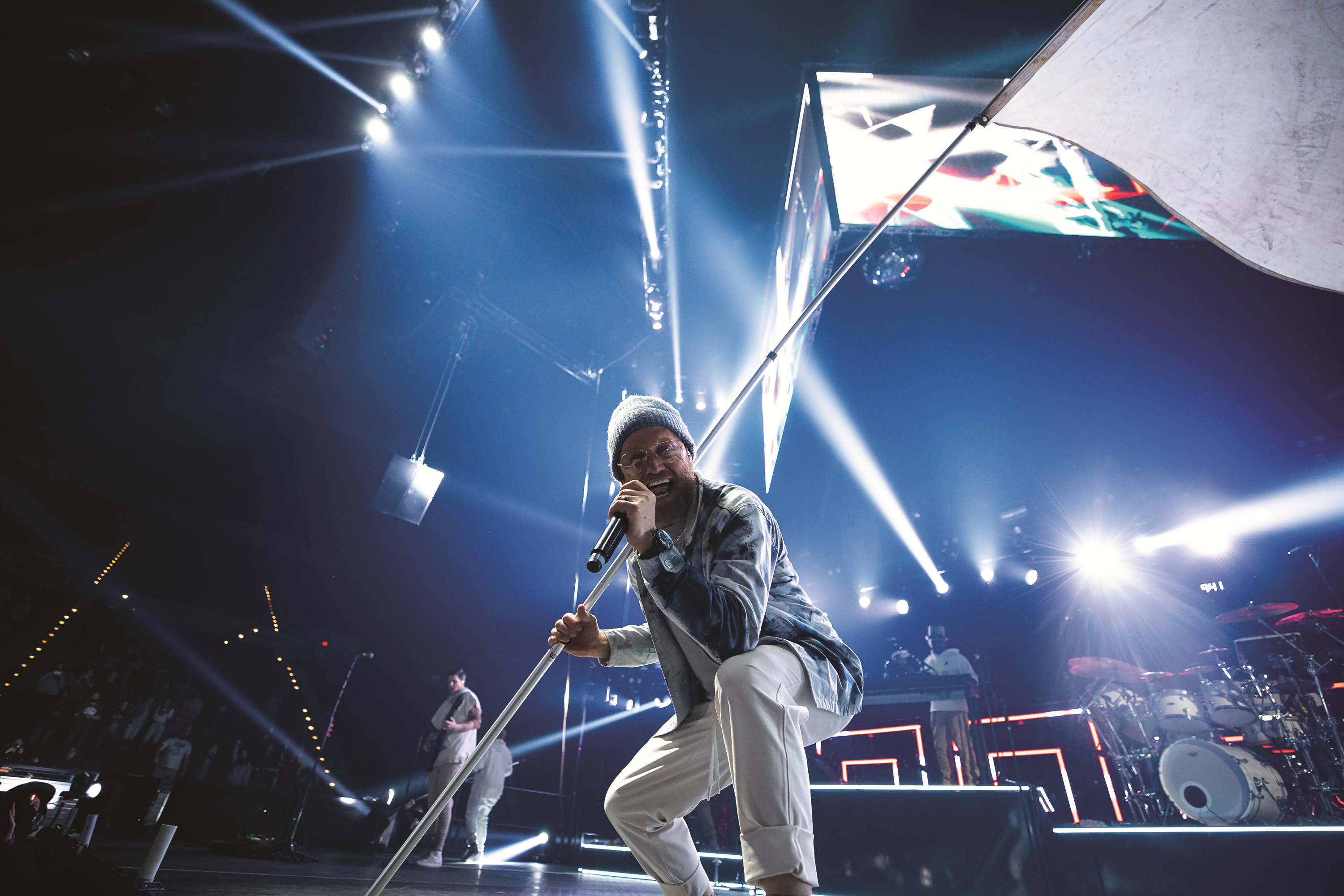 Diego Brawn / Courtesy Awakening Events –
TobyMac, who appeared in three different tours promoted by Awakening Events on Pollstar’s Mid-Year North America Chart, performing on his Hits Deep Tour in Pensacola, Fla.
What else did you do besides the drive-ins?
In February, we started our annual “TobyMac Hits Deep Tour” that we do every February, March, April. Typically we’ll do West Coast in ‘22. East Coast in ‘23 and we’ve been doing that for the last six or seven years with Toby. But we had a handful of arenas in like 13 cities, mainly Texas, Florida where they wanted us to do a social distance arena tour. And I got to tell you, that was the most challenging thing I’ve ever done in my career with all the safety protocols. We took 83 people out on the road and did 18 shows in 13 cities this last February. We did the first arena tour in the world since the shutdown with COVID.
Where were you before Awakening?
In 1989, I had a buddy in Arkansas that did outdoor Southern rock shows and he asked me to help him. He said, “I just need you to be a security guy at the gate and check passes.” And so I did that and I was going to college and working at a home electronics store that sold concert tickets.
Who played that first show you did security for?
I want to say it was Steppenwolf and Blackfoot. In 1991, I had my first concert I booked and marketed it and had risk in it, and that was Peter Frampton.
Whoa! Did you continue to be a promoter?
After that, I got asked to go to work for a local independent radio station who did their own annual event called Rockin’ the Rock. I went to work for KKYK in about 1993 and kept doing that event. I was involved in the concert scene and able to continue doing things with my buddy, and still be with the radio station. And then in 2004, I left and started my own company. And so here we are.
Peter Frampton and Steppenwolf and Blackfoot are secular, and Awakening does Christian music. What prompted that change?
I’m a person of faith. That’s part of what has helped me walk through the pandemic and everything. And obviously, through life and each turn that gives you. 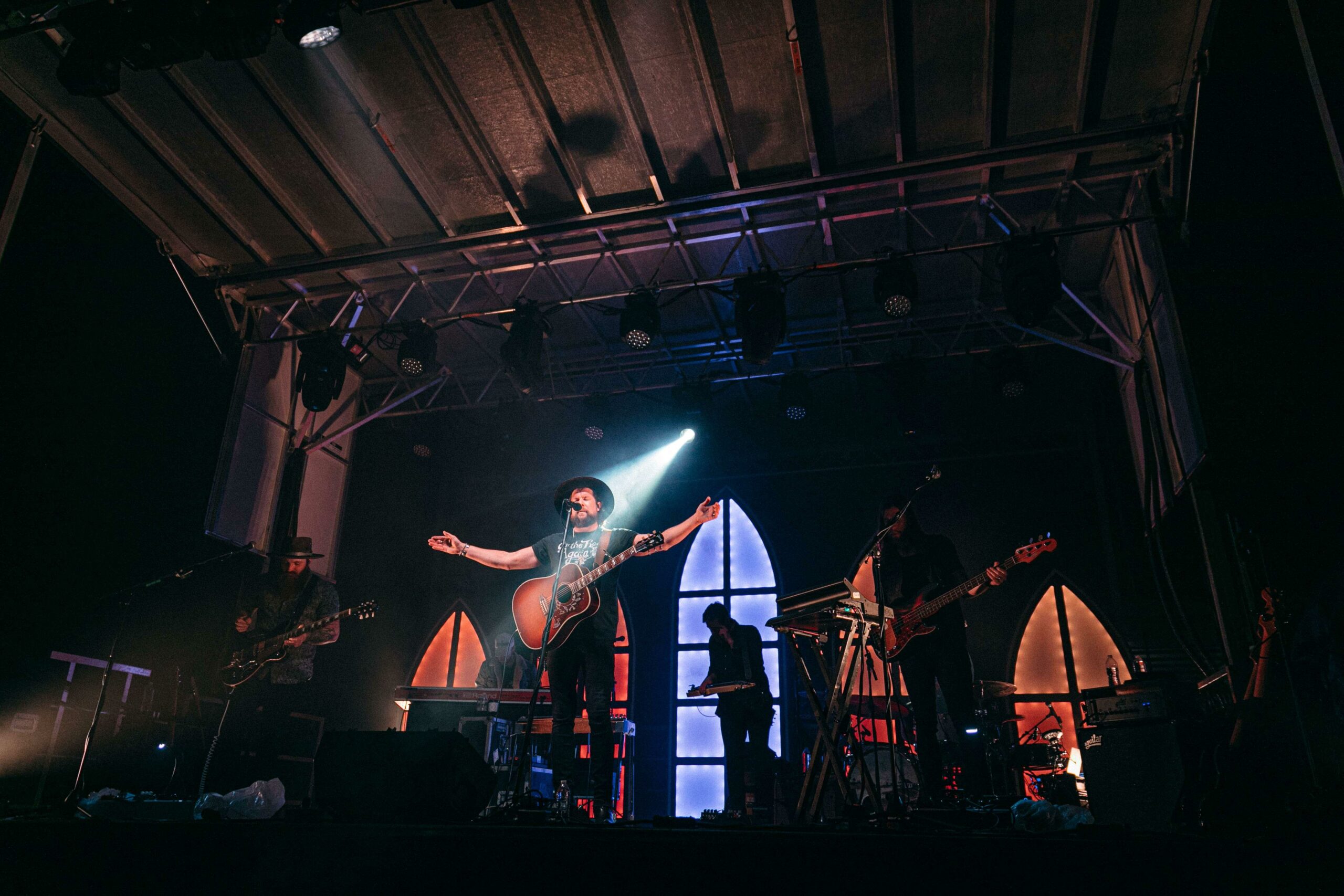 So you were raised that way, it wasn’t an epiphany?

Yes, that’s right. In looking at the music industry over the years, I saw some really great artists like TobyMac, Chris Tomlin, Skillet, Steven Curtis Chapman, Zach Williams and Third Day. And I saw this consolidation thing that was going on in the mainstream with not only radio stations but promoters. There had been the SFX roll-up. In the contemporary Christian space, that really wasn’t happening. I looked and saw a lot of good people with great intentions, but there wasn’t somebody really focused on building relationships with artists in the touring world.  Plenty of people are creating their own brands, their own festivals, their own agendas – and that’s great, everybody’s got their own business model – but I love collaborating and I clearly saw an opportunity to work with some great artists and build some deep relationships and work with them to build something on their brands, on their names together. So that’s really what prompted it.
And this weekend, our River Concerts company has a show at the amphitheater Sunday night that’s sold out with Jamey Johnson and Whiskey Myers and AEG, it’s a show that they originally booked with us because we run the facility and got a partnership with Starr Hill Presents where we manage the amphitheater there in Little Rock. So we do all genres.
It’s interesting that a significant number of artists on the mid-year charts during this difficult time were Christian acts.
Do you think there’s something with people of faith and the music’s message of something bigger resonating in this difficult time that led to its success?
I struggle when music gets a title put on it or gets put in a bucket. It’s the old saying, you hear the old radio people say, “Well, back in the ‘50s, ‘60s, there was two musics: There’s country and there’s Western.” The point I want to make is as it gets titled – Christian music, country music, rock, pop, AC, urban or whatever, the end of the day, it’s the same Fender Strats. It’s the same drum kit. It’s the same bass rig, the same piano, it’s music. Some of the lyrics written in the contemporary Christian space have lyrics of hope. It’s positive. It communicates that. I think that the beautiful thing about it is that it’s not just limited to one class of people. It’s whoever wants to turn the dial on or whatever.
I think the media kept many of us afraid, were you fearful? Did you have faith that things were going to be okay?
Well, we were never reckless. I mean here’s the thing, on any given day to begin with, are we really 100% in control anyway? I’m a Type A personality. Historically, that personality type doesn’t stop long enough to even smell fear. But in this pandemic, the most challenging thing for me was the first couple of months with an invisible enemy which we didn’t know what it was. There’s so much we didn’t know and there’s still a lot we don’t know. We really just had to step back and not operate in or out of fear and focus on what we can do. That’s what made the difference for us.
What does your year ahead look like?
Man, it looks super encouraging. We’re excited, we’re going to be announcing a lot more – we’ve got all of our rescheduled dates and we added some dates to those tours that we rescheduled. And we’re going to have some major announcements coming in toward third quarter. And it looks really bright.
# Big Daddy Weave# Cain# chonda-pierce# Colton Dixon# Jordan Feliz# Mac Powell# skillet# steven-curtis-chapman# tobymac# Zach Williams