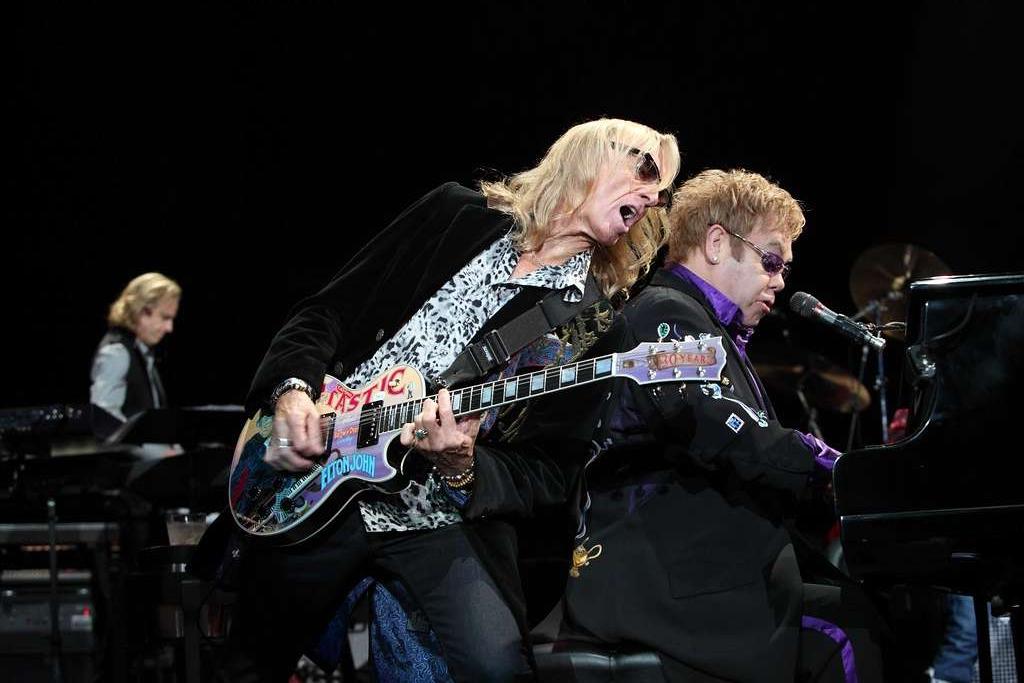 Davey Johnstone was playing guitar in a British folk rock band called Magna Carta when in 1970 a producer friend asked him to play on an album being recorded for a songwriter named Bernie Taupin. That led to an introduction to another British musician by the name of Elton John.

Johnstone, who was born in Edinburgh, Scotland, was asked to help with a problematic guitar opening to a song called “Madman Across The Water,” which became the title track of one of John’s best-loved and important albums, released in 1971. He nailed it and was asked to join the band, making his debut as an official member on Sir Elton’s next album, Honky Château.
Johnstone is now Elton John’s Music Director as the legendary musician takes his final touring bow on the global “Farewell Yellow Brick Road Tour,” now in its fourth year, interrupted for two by the pandemic.
Johnstone has also added instruments including electric and acoustic guitar, mandolin, slide guitar and banjo to records from an array of classic rock icons, including Stevie Nicks, Alice Cooper and Meat Loaf. And he’s just released his first solo album, Deeper Than My Roots, since 1973’s Smiling Face.
Pollstar: What was shaping up to be the biggest tour of your career, and your last with Elton John, hit pause for almost two years. Was it difficult to be in the midst of that huge tour and come to a sudden halt?
Davey Johnstone: The COVID thing actually was kind of a gift for me because my touring schedule with Elton over the last 50 years or so has been so intense that it really gave me time to realize that this was it.
I didn’t know it was going to be two years. Nobody did. We came back from Australia on March 8 or 9 (2020) and then, a month later, I realized I’m not going anywhere for a while. But it was like a gift for me because I got a lot of time to spend with my wife and kids and actually get some sleep in my own bed on a regular basis.
Then there was the fact that I didn’t have to concentrate on Elton’s music, or think about how I have to rehearse the band, or put things together for the next gigs. I was free to do exactly what I wanted to do, which is play my own music. I decided to write some songs around guitar pieces that I was composing and I got my friend Rick Otto, who’s an actor and poet here in California, to help me lyrically with the record. He came up with some wonderful ideas and we edited them over the months by texting each other back and forth. We never saw each other, obviously. By July, I had eight or nine songs that sounded really good.
You also enlisted several family members to help with the record. Was the whole family sequestering together?
My youngest boy, Elliott, is the lead singer on most of the new record. Charlie, my next youngest, is a wonderful keyboard player and engineer and I had him play keyboards on it and also record me on a few tracks in the house. I gave my son Jesse a call and said, “Would you play some drums on this song if you like it?” So I sent him a couple of tracks and he loved it and he said, “I’ll do it.” He remotely recorded some drums on the track I sent him. He sent them back to me, and that’s how we worked through this whole thing. And Tam, my eldest boy who lives in the UK, mixed a couple of the tracks for me. My daughter Juliet did all the artwork. So it’s very much a family affair.
I’m really thrilled with the result. It’s only been out for a couple of weeks and I’m getting a lot of great reactions from people who are posting on Instagram saying how much they love it, so I’ve already had the desired effect. People are enjoying the music and they’re realizing that I’m doing something from the heart. It’s all kind of homespun, but it sounds good because, after all these years, I’m pretty together in the way I record.
Now that the tour has resumed, how are you all faring?
We’ve restarted the “Farewell Yellow Brick Road Tour” just over a month ago. We’ve done about a dozen gigs and soon we’ll do what are going to be the last two concerts at Madison Square Garden. We’ve done I guess around 70 shows there over the years.
Elton’s having a great time. He’s really enjoying playing again. We thought it might have been a chore to get back to, and difficult to restart, but we’ve just fallen right back into what we’ve been doing for the last 50 years, which is playing great music together. So we’re back in the groove again. 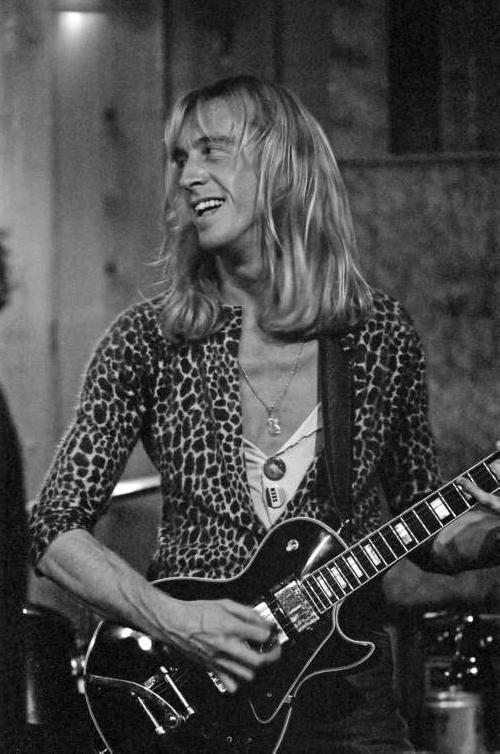 – Davey Johnstone
A final stadium leg was added, including a return to Dodger Stadium, which was the site of one of Elton’s most historic concerts. Will that be a special stop again?
It should be pretty historic. Obviously, we love playing to our fans that want to see us after all this time. But I believe Dodger Stadium is the actual, final gig in the States. In 2023 we go to New Zealand to finish off a few dates that had been canceled back there. Then we’ll go through Europe and finish the stadium dates, and that will be it.
It must be pretty emotional for everyone to be coming to an end after 50 years of touring.
It’s quite emotional to do these dates because we see a lot of the fans, and they’re very emotional. There’s a lot of tears when they realize it’s the last time they’re going to see us up there, because many of these fans have been to like 50 shows, 100 shows, 200 shows. We think it’s a great way to say goodbye to touring and thank you to our fans.
How do you envision life, and your career, after Elton John?
For me, music goes on forever. Elton and I are not touring again. But I’m sure he’ll do other stuff; maybe he will always record. He’ll always write. There may be things that we’ll do after this whole touring thing is over.
For me, personally, because of what I discovered during the COVID period and with this new record, I’m already writing stuff for my next album. I am not going to be slowing down as far as my own writing, recording and maybe doing some live dates. And it’s become clearer to me that I have other stuff to do.
I must admit that, for a while, I envisaged that perhaps after I finish touring with Elton, maybe I’d focus on doing movie scores, writing music for films and TV and stuff like that. But then, with my songwriting, I’ve realized that, OK, this is still really viable and it’s worthwhile. So I’m going to continue doing that. I’m going to keep on writing. And maybe some more live stuff with my own music.
What was the catalyst for joining Elton?
I was asked to join a band called Magna Carta, which was a folk rock band in Britain, and they were having some success on the charts. While I was with them, our producer suggested that I might like to try and play something on one of Elton’s records. He was getting interest in America, and they invited me in to play on “Madman Across The Water.”
They’d been having trouble finding an arrangement for it. So when I came in, they said, “Look, we’d really love to try to get an acoustic guitar intro.” And I said, “Well, what about this?” And I played what immediately came into my mind. And they all said, “That’s it.” It was very spontaneous. I was brought in to play on that track, and “Tiny Dancer.”
About a week later I got the call saying, “Look, [Elton] loves you. You should join.” It became his new studio band with me, Nigel Olsson and Dee Murray. The four of us proceeded on a really wild journey over the next several years, making all these giant hits starting with “Rocket Man,” which was our first No. 1, then going to “Daniel,” “Crocodile Rock” and so on. Then we were joined by Ray Cooper.
You’ve also played with some greats, like John Lennon.
John and I and Elton met in 1974 and became fast friends. We recorded our version of “Lucy in the Sky with Diamonds” at the Caribou Ranch and John sang and played on it along with me and my guitar. And he began traveling with us on the road because he wanted to. He hadn’t done live gigs for many years. But he played with us at Madison Square Garden, which is a wonderful memory.
Touring is very much a different animal now than it was then, I’ll bet.
It’s become such a huge machine and not one that can be thrown together casually. It’s a massive tour where we have grown to about 100 people on the road. Between Elton and his people, the band and our assistants, and then the backline and the whole crew, there’s at least 100 people moving with the tour.
And now, 50 years later, you are winding down your last Elton tour, creating your own music and preparing for the next phase of your life.
That’s why we’re saying goodbye to it. By summer of next year, we’ll be done. I’ll continue to do the things I’d like to do, like playing smaller venues or maybe some folk festivals like I used to do in my younger years. I’m just hoping that people continue to enjoy the music I’m creating on my own as much as we’ve enjoyed what I’ve created with Elton over the years.