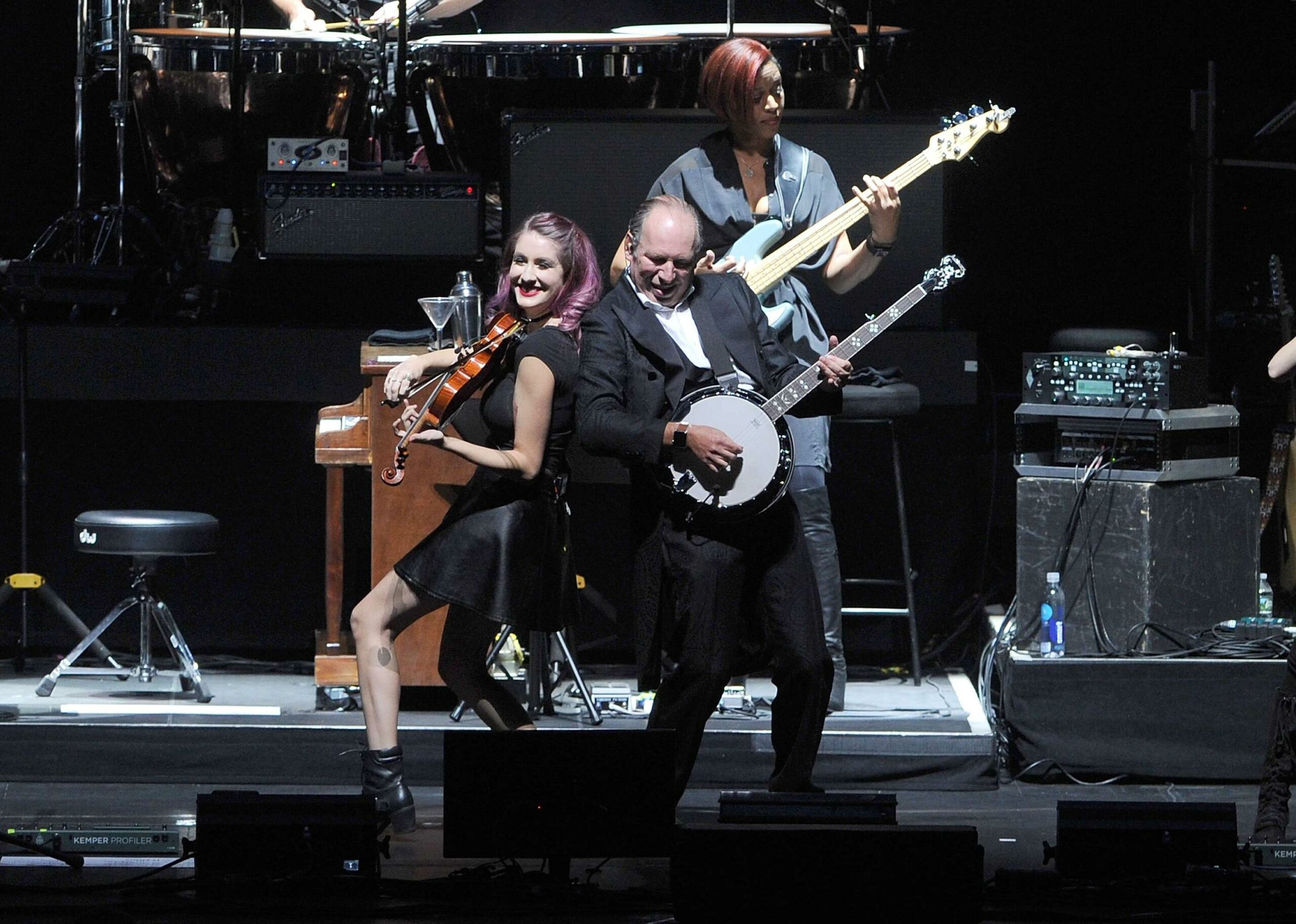 Brad Barket/Getty Images – Hans Zimmer is touring again, and this time around he
This picture was taken at a performance at Radio City Music Hall in New York City, July 25, 2017.
Hans Zimmer, the man responsible for some of the biggest and most well-known movie soundtracks and films scores, is going back on tour in Europe, and this time, he’ll be on stage himself again.
“Hans Zimmer Live” first toured in 2016, eschewing the usual format a traditional maestro in charge of an orchestra, and backed by film clips. Instead, Hans Zimmer took to the stage himself, and made his band and  longstanding musical companions the focus of the concerts, combining these musicians with a classical orchestra.
The Man Behind The Curtain: Welcome To The World Of Hans Zimmer 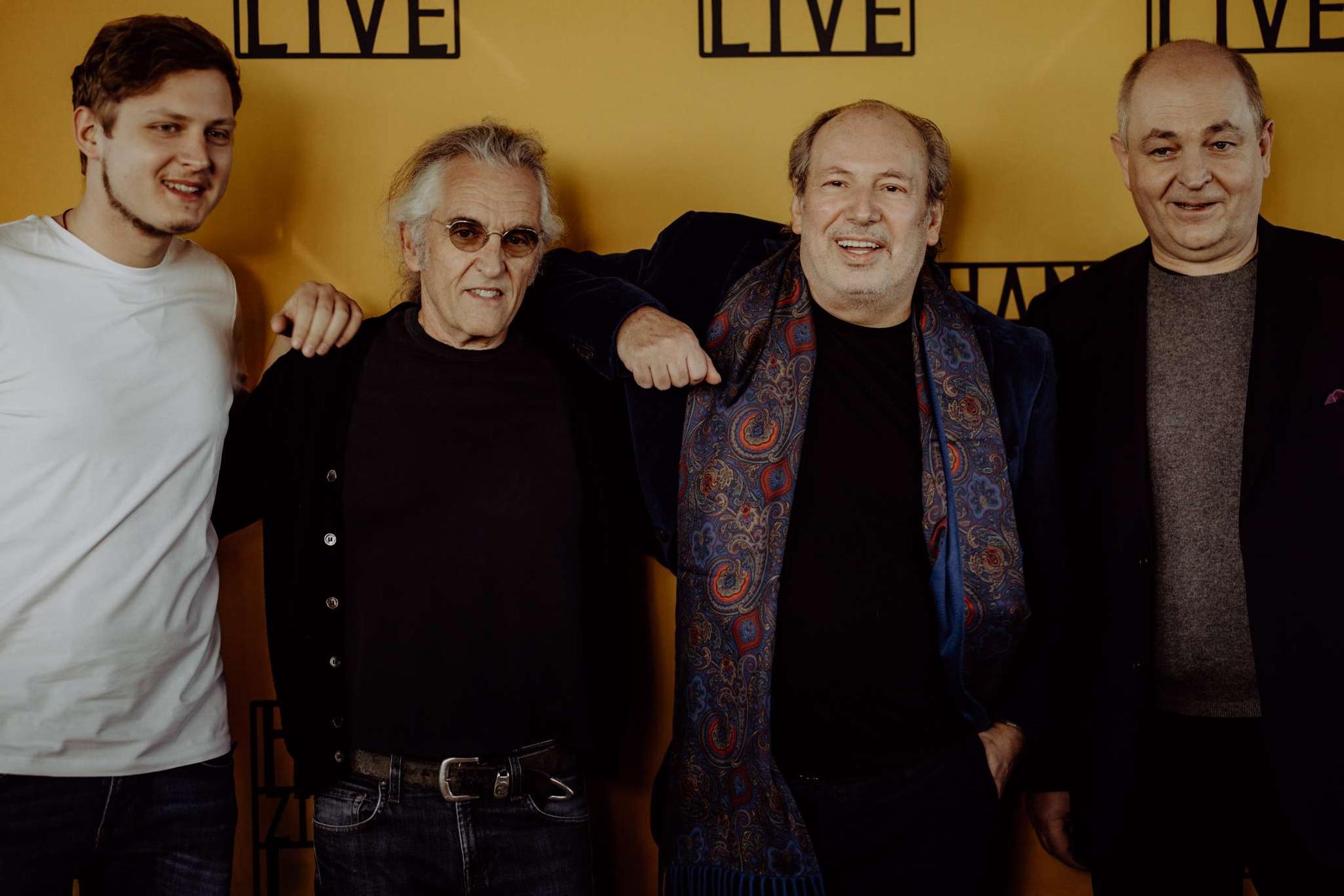 On “Hans Zimmer Live,” the composer takes on the roles of both conductor and presenter, talking with the audience to give them an insight into his creative process and share anecdotes from working in the “dream factory” of Hollywood.

Rehearsals for “Hans Zimmer Live – Europe Tour 2022” have been taking place in Los Angeles, Odessa, Essen, and Berlin since the beginning of February, and the new show – with an all-new programme – is set to launch today, March 11, at Barclays Arena in Hamburg, Germany.
Currently, concertgoers in Germany need to provide a negative test in addition to proof of full vaccination or recovery, and they’re required to wear a mask inside the building. The tour closes April 30 at Avicii Arena in Stockholm, Sweden, where no COVID restrictions on live events are currently in place. Full list of dates below.
Fifteen months of work from Hans Zimmer and his team have gone into arranging twelve new suites of Zimmer’s greatest hits, which will be played by a nineteen-member band and an orchestra on three hundred different instruments.
To design this new production, Hans Zimmer engaged some of the top creative minds from the U.S.: John Featherstone took on the role of lighting designer, Derek McLane, whose recent work include the Broadway musical “Moulin Rouge,” was responsible for the stage design, and fellow Broadway designer Peter Nigrini (“MJ the Musical”) designed the set. Choreographer Barry Lather directed an eight-member dance troupe. 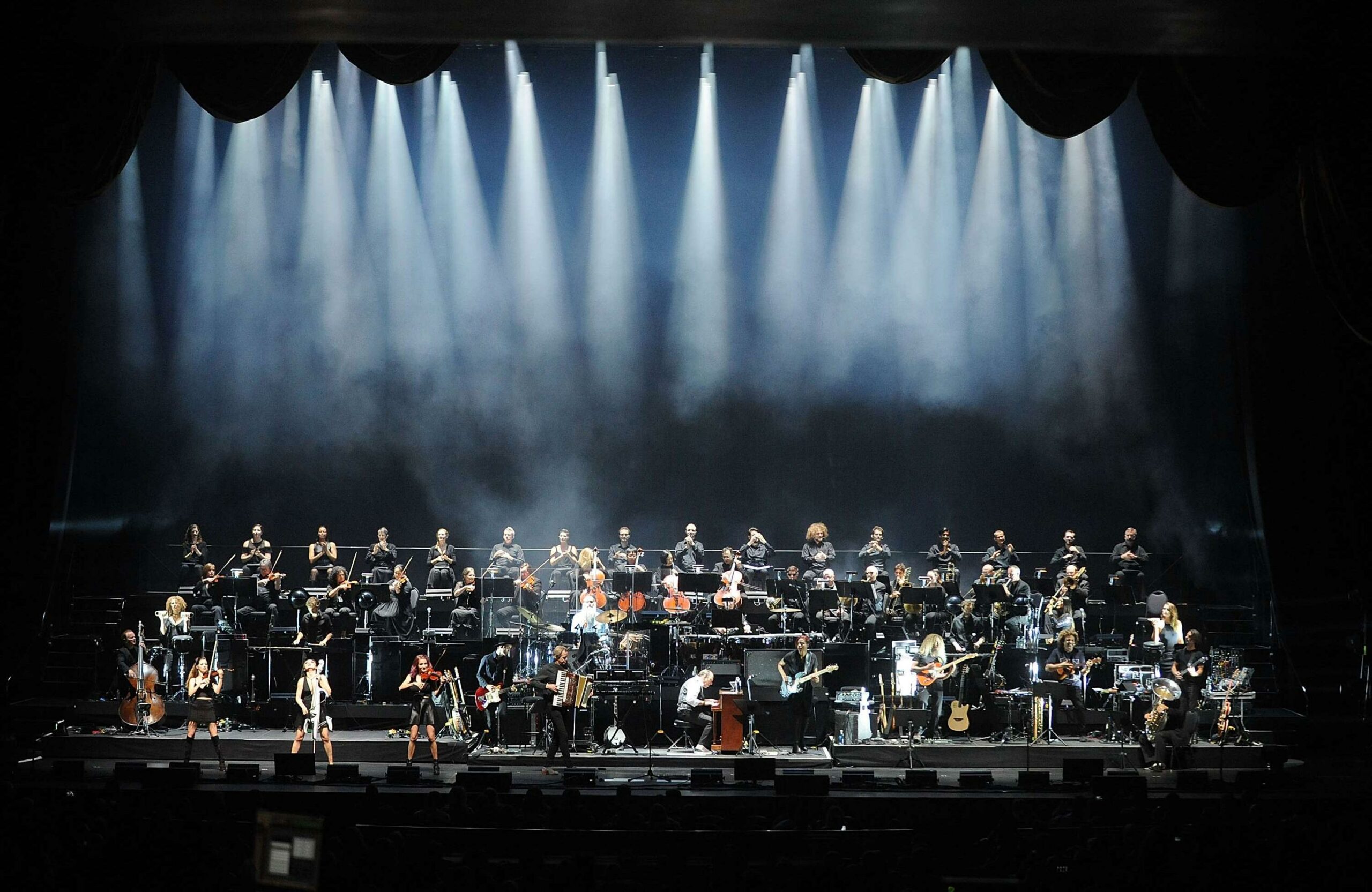 Brad Barket/Getty Images – “Hans Zimmer Live” is a huge endeavor:
In total, the tour comprises 130 performers and crew members, who’ll give 30 performances in 16 countries – the first international production of this magnitude since the beginning of the pandemic.

In a joint statement, Featherstone, McLane, and Nigrini said, “we’ve drawn together the best tools and techniques from concert touring, theatre and opera to create a truly unique experience. With 300 moving lights or automated trusses, a massive stage set covered with textures from the Dune production design, and more than 11 million pixels of video, the visual design will be nearly as breathtaking as the music created on the stage!”

In total, the tour comprises 130 performers and crew members, who’ll give 30 performances in 16 countries – the first international production of this magnitude since the beginning of the pandemic.
Semmel Concerts and RCI Global, the promoters of “Hans Zimmer Live,” engaged the Odessa Opera Orchestra from Ukraine for this tour. That was before Russia attacked Ukraine in the early hours of Feb. 24. Not all of the orchestra’s members have managed to escape from the country. Fellow musicians from all over Europe will be temporarily filling the gaps in the ensemble for the duration of the tour.
Dieter Semmelmann, CEO at Semmel Concerts Entertainment, said it was “a very emotional and distressing situation for us all. We are very happy that some of our musical friends from Odessa have managed to escape to Germany – some of them with their families too. But we are very worried about those who have not yet made it over the border. We will do everything we possibly can to help our Ukrainian friends out of this very difficult situation. In the meantime, we have asked a number of fellow musicians to join us so that we can have a complete orchestra.”
‘Lay Down Your Arms, Let There Be Peace’: Industry Stands United In Ukraine Crisis
A statement from Oleksandr Lysiuk, tour manager of the Odessa Opera Orchestra reads:
“My name is Oleksandr Lysiuk. I am a Ukrainian. And I am a musician.
“At around 5 a.m. on February 24, my homeland was invaded in an act of Russian terrorism. I cannot and I will not describe it in any other way.
“Instead of birdsong, my three-month-old son awoke to the sound of explosions.
“All of our lives – not just those of my family, but those of 40 million Ukrainians – have undergone an irreversible and appalling change.
“How do I feel and how can we live through all this? We all feel immense anger at this terrible tragedy. But we have survived, and nobody can break us or take away our independence.
“I am the Odessa Opera Orchestra’s Tour Manager. Thankfully, all of our musicians who have managed to escape are now in a position to go on tour. We are safe.
“I would like to extend my thanks to BNK Music Production, RCI Global, Semmel Concerts and Hans Zimmer for all their help. Had they not offered a helping hand, we would not be here today.
“It is now my heartfelt wish that we take this tour in Germany as an opportunity to build a new orchestra – the Odessa Orchestra with Friends.”
The Fog Of War: Ukrainian & Russian Live Biz Call To ‘Stop The Madness Immediately’
“Hans Zimmer Live” – European Tour:
March 11 – Barclays Arena Hamburg – Germany
March 13 – Hanns-Martin-Schleyer-Halle Stuttgart – Germany
March 15 – LANXESS arena Cologne – Germany
March 20 – 3Arena Dublin – Ireland
March 22 – The O2, London – UK
March 23 – The O2, London – UK
March 24 – Manchester Arena – UK
March 26 – Rudolf-Weber-ARENA Oberhausen – Germany
March 27 – Ziggo Dome Amsterdam – Netherlands
March 28 – Ziggo Dome Amsterdam – Netherlands
March 30 – Mediolanum Forum Milan – Italy
March 31 – Unipol Arena Bologna – Italy
April 2 – Hallenstadion Zurich – Switzerland
April 3 – Hallenstadion Zurich – Switzerland
April 5 – Accor Arena Paris – France
April 6 – Accor Arena Paris – France
April 7 – Accor Arena Paris – France
April 9 – Olympiahalle Mu¨nchen, Munich – Germany
April 10 – Arena Stozice, Ljubljana – Slovenia (postponed from Feb. 26, 2022)
April 11 – Papp Laszio Sportarena Budapest – Hungary (postponed from March 3, 2022)
April 12 – Wiener Stadthalle, Vienna – Austria
April 14 – Atlas Arena Lodz – Poland (postponed from March 8, 2022)
April 19 – Mercedes-Benz Arena Berlin – Germanny (postponed from Feb. 15, 2022)
April 20 – O2 Arena Prague – Czech Republic (postponed from Feb. 13, 2022)
April 21 – Tauron Arena Krakow – Poland (postponed from March 7, 2022)
April 23 – SAP ARENA Mannheim – Germany (postponed from Feb. 24, 2022)
April 24 – Sportpalais Antwerpen, Antwerp – Belgium (postponed from Feb. 23, 2022)
April 27 – Royal Arena Copenhagen – Denmark (postponed from March 10, 2022)
April 29 – Telenor Arena Oslo – Norway (postponed from Feb. 18, 2022)
April 30 – Avicii Arena Stockholm – Sweden (postponed from Feb. 20, 2022)
Subscribe to Pollstar HERE