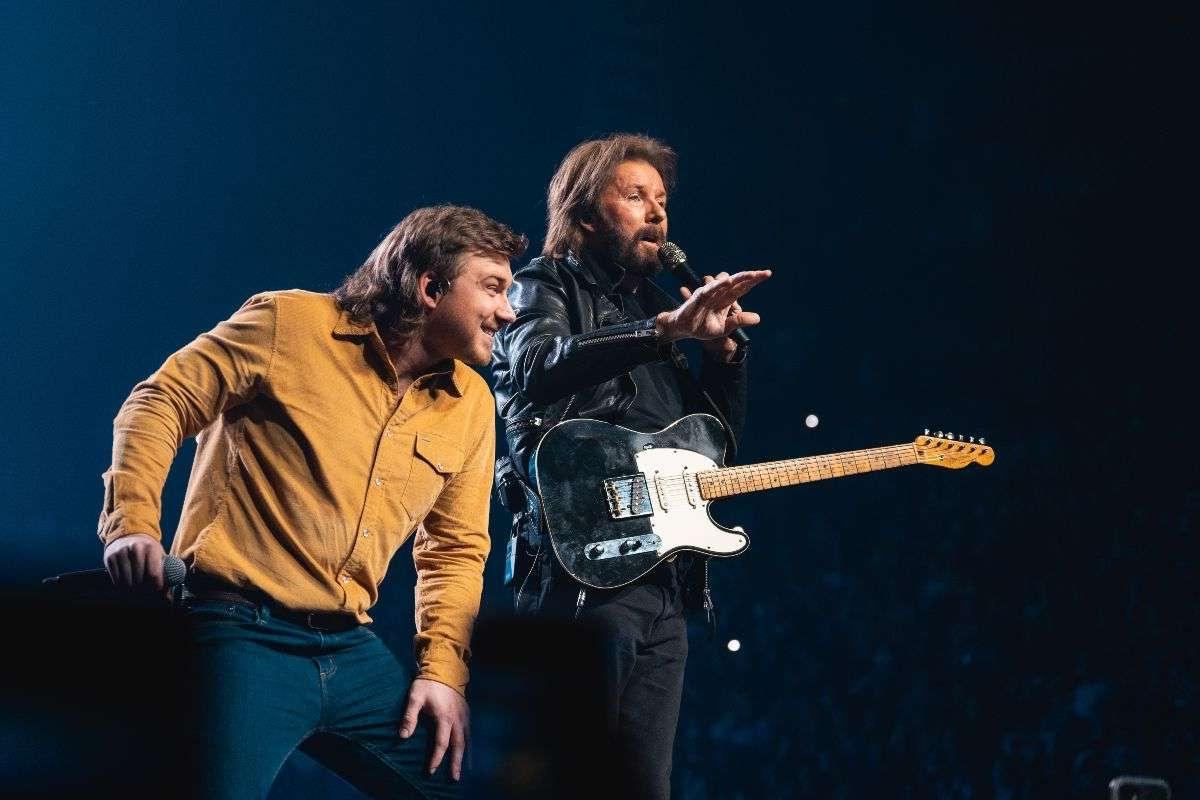 After a career put on pause following his drunken use of an egregious slur, Morgan Wallen is finding his way back to the world he was building when it all came to a screeching halt. After testing the water last fall, Wallen arrives in Nashville to headline three consecutive sell-outs of the Bridgestone Arena that saw a largely teen/20-something crowd singing along to all 26 songs delivered over the first night’s set.

From the moment Lil Durk/Wallen’s “Broadway Girls” rolled from the very amped sound system, the roar was palpable. Denied seeing the man who had the #1-selling/streaming album of 2021 with the Academy of Country Music’s Album of the Year Dangerous, the opportunity to come together under this collection of songs landed like a moment of rapture for audience.

Rising on a small stage with dry ice smoke curling around the flooring, Wallen alone played a church piano version of “Sand In My Boots,” his wistful summer love that slipped away song. Intimate, heartfelt, it humanized the East Tennessean, almost making him vulnerable to a world that has seen so little of the chaotic star who disappeared to learn and work on himself.

As the mini-stage sank, his band emerged to the set proper dressed in workman’s uniforms. Several flexing a ‘90s hard rock posture, the change of gear was evident. Wallen grew up with an ecumenical pop music take, so the irony doesn’t seem to register; though metal-edged guitars often cut through the creamier kinds of material that makes Wallen such a favorite of the girls, the copping squats while playing says it all.

But it’s not just girls. Like reigning CMA Entertainer of the Year Luke Combs, Wallen embodies the lives of young men in the flyover – content to be who they are, having their own kind of fun and sustaining their own kinds of heartbreak. The full-band set-opener “Something Country,” its trap-rhythmed, big-guitar-blast, time-changing sweep the city girl off her feet moment, Wallen dropped an invitation to the entire Bridgestone to come celebrate how the redneck half lives.

Over the course of the evening, the 28-year-old built temples to that way of living. “Country A$$ Shit,” “Whiskey Glasses,” the career-launching “Up Down” and “Still Goin’ Down” are the expected tropes of country partying down, but the winsome “Silverado For Sale” suggests the way kids paying their own way pass it along and “Rednecks Red Letters Red Dirt” offers truths that reach a little deeper than the field party or dive bar.

Wallen is a complicated proposition in a nation divided. So many intellectual/media-centered people bought into a Hillbilly Elegy take on working class Southerners, overly-simplified and easily looked down upon, the fact these people neither aspire to nor are impressed by what Wall Street types are chasing is confounding. Simpler, yes, but convicted – and ready to savor every drop of their life, whether it’s shooting whiskey, dropping a line or bowing their head in church to ask forgiveness for Saturday night.

“More Than My Hometown,” the second to last song in the set, sees the singer watching the high school girlfriend drive off, recognizing that as much as he loves her, he’s not cut of the stuff to leave where he comes from. That is both the conundrum and connection point for Wallen’s legions of fans: he knows who he is, home is where he’s from and he isn’t gonna get about his raising.

That brash chase the girl/bruised when she’s gone is a truth that Wallen inhabits with the same wounded honesty that made Jackson Browne so sigh-inducing in the ‘70s and ‘80s. When his voice twinges, you believe that the hurt is real – and the love was the kind we all hope for.

If Wallen’s voice, slightly porous, nasal and worn in places, isn’t an obvious seduction instrument, the believability adds dimension to the lyrics. Wallen is also not afraid to put it all out there, his wanting the girl or the fact that he is in pain. “865” is the echoes of what’s gone, “7 Summers” ponders does she think of me, while “Dangerous,” with its too cute “ooooh-ooooh” chorus, belies the damage he’ll do trying to kill the pain. 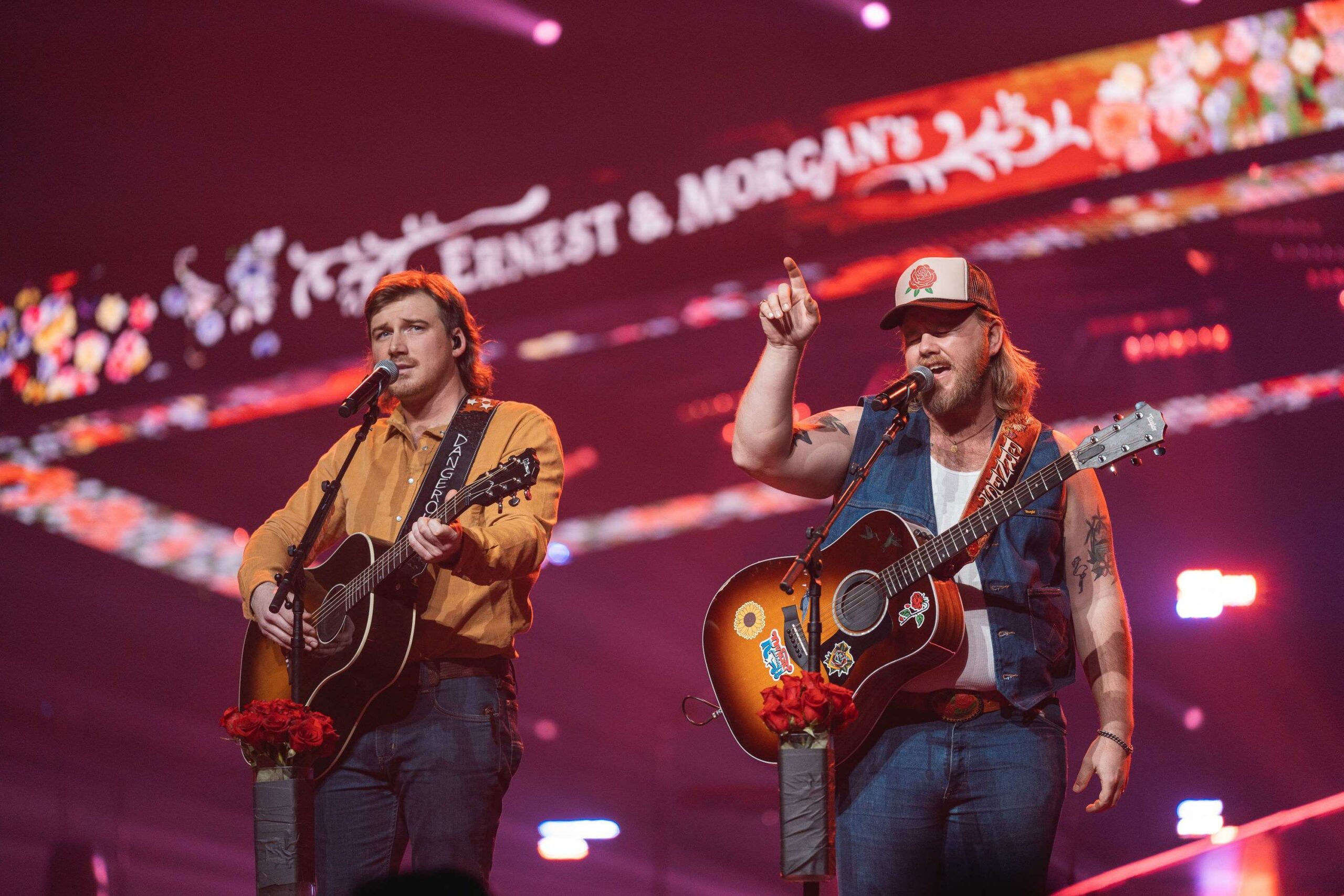 Explaining “Chasing You,” another of gone girl midtempo, was the first song he wrote – and its lyrics contain the confession he only got as far as Guitar Town – and it became a #1, the sense of how other-worldly all this is gets concretized. A kid from nowhere, with the ability to distill his life in a way that pulls others to him, he never intended for all of this, but here he is.

Indeed, the production in places overwhelms him. The band so pummeling, the intimacies his songs often contain get lost. His strength is his personability, the audience identification.

To that end, he acknowledged how many people in the building he cared deeply about, who cared about him. He avoided addressing the elephant in the room; but brought out Academy of Country Music co-host Jimmie Allen for the set-closing “The Way I Talk,” suggesting perhaps racial unity through the music instead of what he says.

Ironic, his strongest vocal was on his harshest critic Jason Isbell’s “Cover Me Up.” Delivered with just acoustic guitar, the strength and conviction in his voice filled the Bridgestone; an attempt to find grace in the wreckage, Isbell’s own song of finding his way to sobriety begs stronger meaning in the wake of all that’s happened.

With rumors circulating that Lil Durk and Eric Church would be gracing the second night’s show, Country Music Hall of Famer Ronnie Dunn brought the shrieking to ear-bleeding levels when he emerged for “Talking Tennessee” at the end of a guest segment with Ernest (“Flower Shops”) and opener Larry Fleet (“Where I Find God”). Clearly reading lyrics, Dunn’s tenor remains timeless, and Wallen’s own vocal measured up. 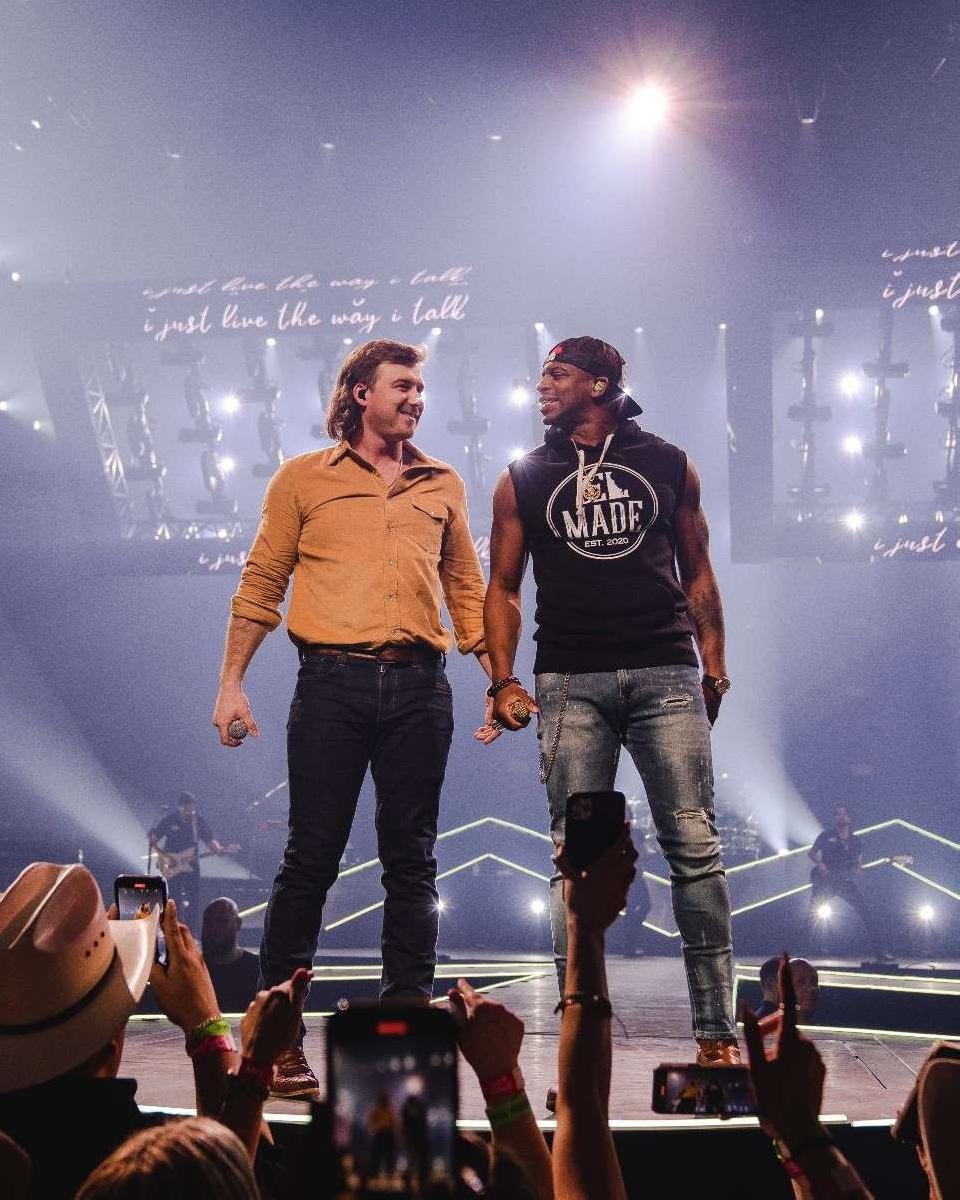 But it was on Brooks & Dunn’s “Neon Moon” that the difference between ‘90s classic/progressive country and today’s realm became clear. Dunn, one of the genre’s greatest vocalists ever, is a purveyor of Texas/Oklahoma beer joint country; designed for the dance floor, it rolls smoothly, works full thoughts and bastes the heartache in nuance. It sounded both refreshing and wildly different.

As generations have now grown up on hard rock, hip-hop and various beyond radio music discovery platforms, genre-loyalty’s eschewed. For Wallen, whose EDM-leaning Diplo collab “Heartless” was a smash, country is a matter of how he lives, the lyrics, the timbre of his voice more than the sonics or instruments he employs.

When direct support HARDY emerged for the crunching “Jared,” the working kid’s middle finger to the guy who got the girl, it was as much neo-metal slamming as anything. The hip-hop influences are now complete: rhythm structures, lyrical delivery, the boasting.

And so… the crossroads. Perhaps not the Robert Johnson variety, but absolutely a moment to consider what this means for country music in the larger frame. Evolution, or perhaps – like the Ernest Tubb Record Shop, who announced its shuttering last week – extinction as a mainstream reality.

HARDY, who in some ways sprang fully formed from Puddle of Mudd’s puddle, is at heart a thrasher. A Mississippi-born and -raised songwriter, he’s been responsible for enough country hits – including Blake Shelton’s award-winning “God’s Country” – to be named the Academy of Country Music’s 2022 Songwriter of the Year. He understands the zeitgeist, the culture and how to fashion hooks to win.

Slightly grungy, though, country doesn’t seem to be where his arrow’s flying. Even with songs that signal life beyond the suburbs, he delivers a harder-edged, rural-leaning take on what Kid Rock was punching towards before Rock’s MAGA reinvention. That Southern thing tempers his music, though, making his defiance favor likability and his swagger three hairs short of ZFG.

In ways, his 50 minutes says as much about where country music may be – good or bad – headed as Wallen’s headlining set. Though Wallen, clearly still young and almost overwhelmed by the fire blasting, laser-beamed, dry-iced and three moving lighting platforms production, has so much road ahead, suggests how this story ultimately ends remains uncertain.