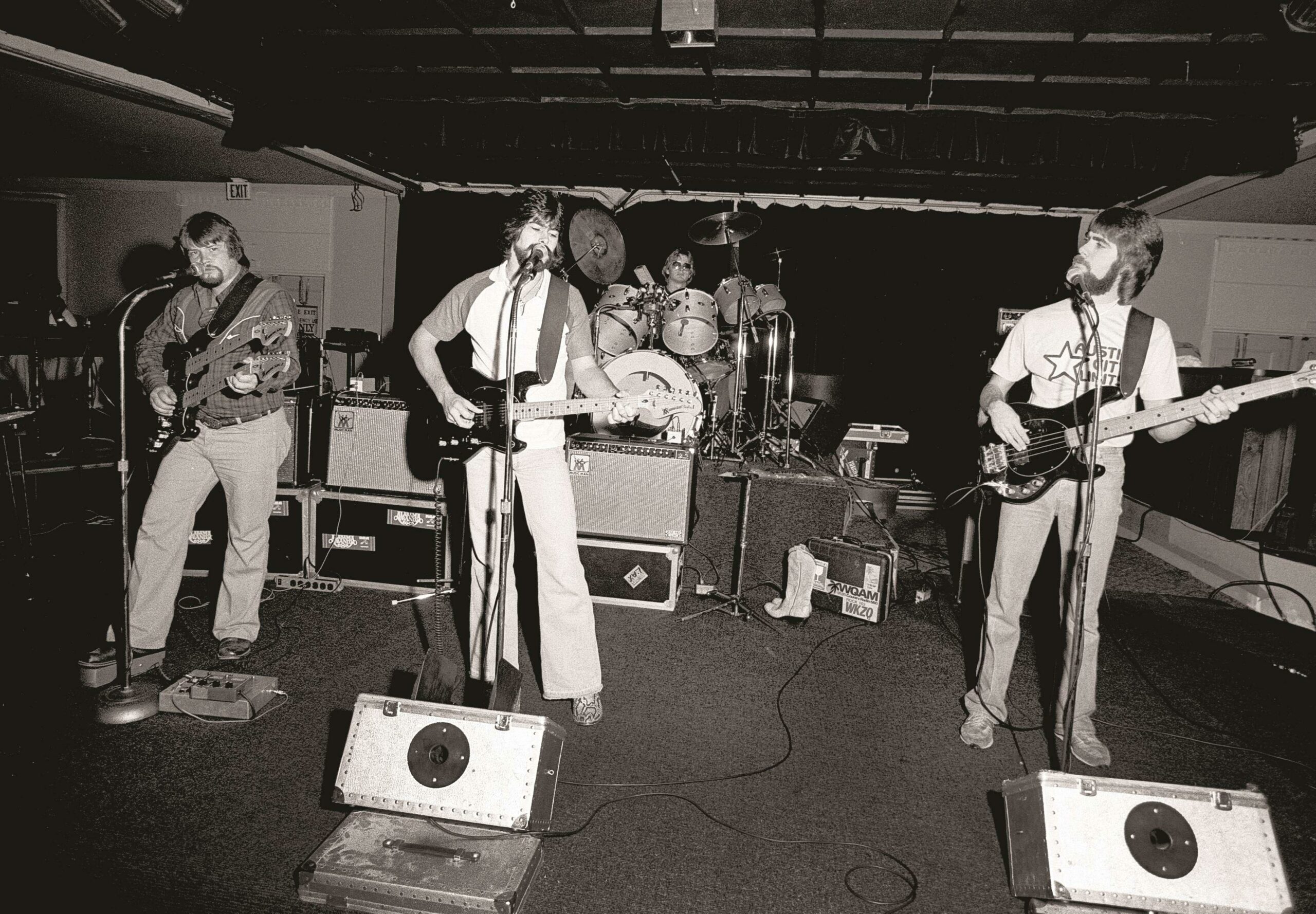 – ALABAMA HAD AN ENORMOUS IMPACT on many country artists, including Kenny Chesney. Here the band is performing at the opening of My Home Is Alabama nightclub in Birmingham, Ala., in September 1980. Photo by Rick Diamond / Getty Images.

Editor’s Note: This July 2019 feature story has been reposted in memory of Alabama co-founder Jeff Cook, who died Nov. 7 at age 73.

Maynardville, Tennessee. In a giant field at a place called Red Gate Farm, a 12-year-old kid sat with his Mom and stepfather. Alabama flew in on a helicopter, and it was the biggest thing I’d ever seen. The idea that Randy, Teddy, Jeff, Mark and my eventual manager were in that helicopter? Even knowing what happened now, I still feel the rush of seeing that like it was yesterday, just some random kid with the biggest band in my world practically playing my hometown.

Way before the world we live in today. There was network news, where I sat with my grandfather watching Walter Cronkite. What he said was the way it was. We had three networks, school, sports, girls and homeroom, but music got through on the radio going to school and coming home. That’s how you heard music when there wasn’t streaming or cell phones. Nine times out of 10 times, it was Alabama. “Feels So Right.” “Mountain Music.” “Old Flames.”
When they came to your county, it was a big deal. Everybody went.
And Bobby Denton, the legendary WIVK disc jockey, introduced them. This local legend introducing the biggest band in the world. When they played “Tennessee River” in East Tennessee, the people just went crazy. And Alabama was all about the fans, all about the show.
Seeing them was incredible, because when they got onstage, there was no stopping them! Randy had his wristbands on, and they were all over the stage. It was edgy; it was coming for you and at you. I’d never been out of the county. But here was this band who understood us, how we lived and what we felt. It was in their songs! They were ours. We didn’t know jam bands; the genius of Phish or Dave Matthews Band didn’t exist. But Alabama? They were the first ones in country, in how hard they played and took the songs places.
The way they looked, and the way they attacked the music. It was genreless, but it was also everything we were. They were our Beatles, because that’s how big they were to us. And they reflected our lives. I don’t think it’s possible for me to ever tell them the impact they had on me … The way they grabbed things I didn’t even realize, energized them, gave them rock & roll intensity.
Kids like us were worlds apart, and yet, we had that same fire in our souls. Alabama got it, and sitting there in that field, my world shifted and what I wanted out of life changed.
No one talks about how they moved it forward onstage, but my life and my live show wouldn’t be what it is without them. I can’t speak for Garth, but you can see it in his intensity and his hunger when he hits that stage. All that rock influence with country lyrics, that’s Alabama.
It’s funny, because years later, Alabama was the first big tour I ever went on. The late ‘90s, and there I was with some song on the radio I was trying to get played. And there I was on tour with the biggest band ever in country music. Every night, getting to go out in front of their fans. Every night, watching and learning from the side of the stage, soaking up as much as I could.
I met Teddy, and we hit it right off; he’d talk to me about anything. Jeff’d always walk up to the bus and tell a joke, make you laugh. Once I got to know Randy, he was so generous in all the things he shared and told me. They never made me feel like I was lucky to be there, instead they made me feel like this was home.
If it wasn’t for these guys and Dale (Morris), all the doors they opened in terms of what you could do in and with music, I wouldn’t be sitting where I am. Even as a child, as something I could dream of doing, there was nowhere for a kid like me – until I saw them.
Everything I do is based on everything they did. Add in a little Bruce, a little Jackson Browne and a little Van Halen, but Alabama is where what we do every night begins. They took it to the next level, but once they got there, they kept going for the next next level. And always the fans. That’s what makes them so important.
Fifty years? Forty-one No. 1s? How many Entertainer of the Year, lifetime achievement awards? They really cared about the songs, the harmonies, the playing live – and it showed. It was – whether they knew it or not – built to matter.
# Alabama# kenny-chesney