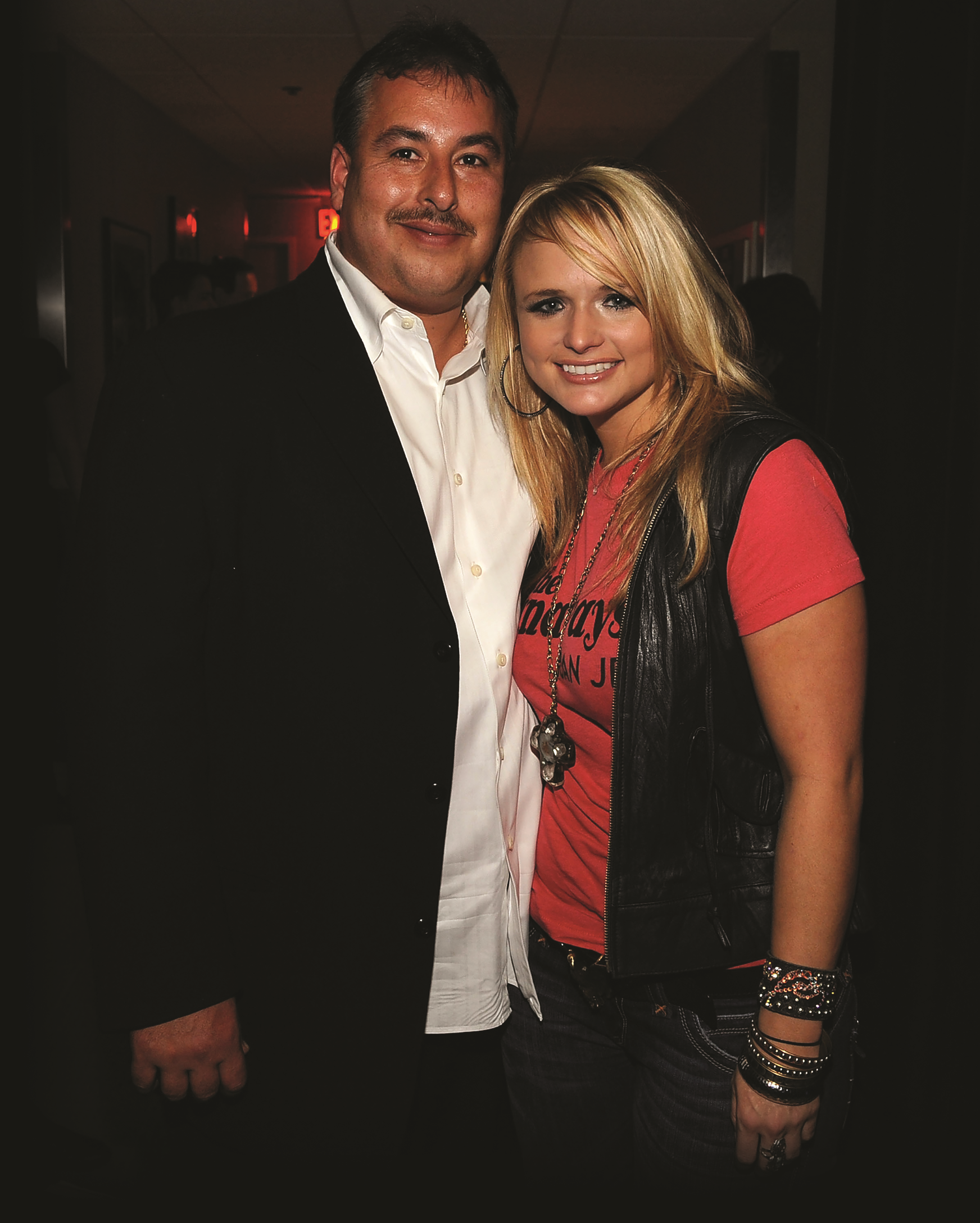 Rick Diamond/Getty Images for IEBA – Call My Agent:
Miranda Lambert with her longtime agent WME’s Joey Lee at the IEBA Honors at Ryman Auditorium on Oct. 12, 2009, in Nashville.
“We had a guy who worked at Buddy Lee, John Polk,” Joey Lee says. “Back then he was covering clubs for us in Texas. He sent me a link to this website, saying, ‘Check this out.’ I clicked, not expecting much. But there was something about this girl’s voice and how she sang those songs.
“I see lots of stuff that’s good, but this? I picked up the phone, called the number listed for contact. Her Mom answered, and said she wasn’t home. So, I gave her my number, asked if she could call me back. When Miranda did, she asked some good questions, seemed to know who she was… and what she wanted.”
Lee pauses, still amazed. “I told her if she ever got to Nashville, I’d like to meet with her. I didn’t know they’d already been here a few times. Just if she came to town, give me a call. One day not long after, the receptionist calls up to my office: ‘Miranda Lambert is here to see you.’
“We didn’t have an appointment. We didn’t have anything. But there she was. I told them to send her up. She came in, sat across from me – and we talked for an hour, mostly about her music, some about how touring works at this other level.
“Her attitude, how she carried herself, I was impressed. This young woman who could hold her own like that, who knew what she wanted. She told me, ‘I’m in a motorhome. My dad’s driving me, my mom’s booking me…’
“I knew I couldn’t replace that. That’s a special thing. I didn’t have the time, so I was grateful. But I wanted to help. I called Glenn Smith of Glenn Smith Presents; he put her on the State Fair of Texas, for probably $10,000, which was unheard of. But he and I both knew it would help.”
Lee cautions: This Miranda Lambert wasn’t on “Nashville Star.” She wasn’t a Texas force yet. She wasn’t old enough to be in the bars she was playing, yet there was something about her.
Lee begged her not to do “Nashville Star,” feeling it would forever color how people see her. Lambert did it anyway, finishing third. Suddenly agencies that hadn’t paid attention were coming around. Recognizing what the Lamberts respected, he played to their values. Not only did he shoot straight about what he believed, he used a shotgun to do it.
“I went turkey hunting with her dad when he was in town, spent three, four hours in the woods with him that morning. We went to the Waffle House afterwards. He knew what I wanted. The only thing Rick Lambert said to me: ‘You know I love my daughter.’ And I said, ‘I know, Rick. I love my daughter, too.’
“I got what he meant. I went to a lot of meetings with her, set up some meetings with people – Arturo Bonaheura at Sony-ATV, Mike Dungan at Capitol, lawyer Jess Rosen.”
Lee and Miranda talked some business, more about music. She told him she wanted Frank Liddell to produce her, asking, “Have you heard Jack Ingram’s Electric album?” Lee asked if she’d heard the Chris Knight album Liddell had made. “She lost her mind for it.”
“I remember 20 people in a room (at Sony Nashville), talking to her. Everybody knows what she needs to do, who she needs to meet with, what producer to work with. She must’ve been 19 years old.
“Finally, she looks up and says, ‘I want Frank Liddell to produce my record. If he can’t, then I’ll go back to Texas, because I don’t need a record deal. I’ll come back in four or five years.’
“John Grady stopped the meeting. He said, ‘You obviously know who you are better than we do. Go on and make your record with Frank Liddell.’
“That’s Miranda. Nothing’s more important than the music. Even then. When Kerosene was coming out and it didn’t feel like there was really a marketing plan, I got on the phone, booked a string of dates at every Graham Central Station. Knowing it was backwards, but we believed if people got to see her, they’d believe in her, too..
“How long did it take her to get a No. 1 single? But those first four, five singles getting into the 20s? They told you who she was; then seeing her? That was where and how it happened. It’s how she built this, fan-by-fan – and they’re not only loyal, they believe.”
READ MORE:
The Unforgettable Fire: How Miranda Lambert Danced In The Flames & Became A Global Superstar